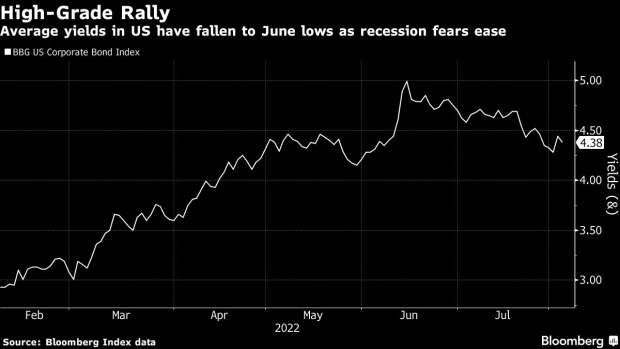 Investors added $1.22 billion for the period ended Aug. 3, according to Refinitiv Lipper data, ending a record streak of 18 weeks of withdrawals amounting to $74 billion. US high-yield bonds are also back in demand, with mutual funds and exchange-traded funds seeing inflows of $2.93 billion over the same period, the second straight week of inflows, as fears over an imminent recession abate.

Borrowers are seizing the rally. The junk-bond market saw two companies come forward Thursday, the first deals to be launched in more than a week, while social-media giant Meta Platforms Inc. led another busy day in the investment-grade primary where issuance has already blown through estimates for the week.

Average yields for investment-grade bonds have been falling for more than a month, reaching 4.38% on Wednesday as early signs of economic slowdown have spurred investors to dial back their expectations for Federal Reserve rate hikes. Junk bonds gained 5.9% in July, their biggest one-month rally in a decade, and have also been rising in August, according to Bloomberg index data.

US leveraged loan funds, however, registered outflows for the eighth straight week as $344 million left following an $833 million exit in the prior period.