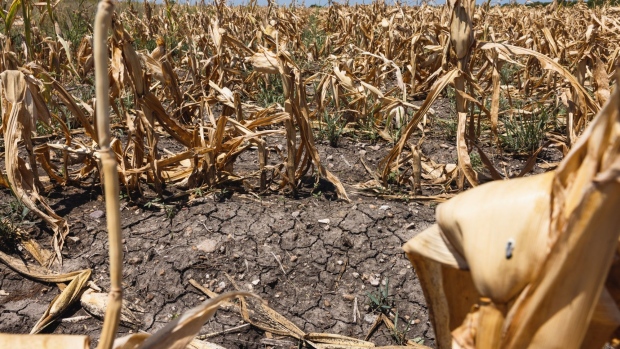 Power lines during a heatwave in Dallas, Texas, US, on Monday, July 25, 2022. Dallas hit its 30th 100-degree day of the year on Monday, NBC News reported. Photographer: Nitashia Johnson/Bloomberg , Bloomberg

(Bloomberg) -- This year is shaping up to be one of the hottest on record for the US, based on a metric that’s crucial to energy traders.

The measure is known as cooling-degree days, and it is used to track how weather affects energy demand. The higher the number, the more fuel needs to be used to cool homes and businesses.

Across the US this week, cooling-degree days value hit 610 on a population-weighted basis -- the highest in data going back to 1950, said Matt Rogers, president of the Commodity Weather Group LLC, a commercial forecaster specializing in energy and agriculture outlooks. The record is well above the 10-year average of 596 and the 30-year normal of 530, he said.

The next highest years on the list are 2010 and 2011, which both had a value of 603 through July 25, according to Rogers. Back in 2011, Texas wilted under record heat in situation that’s repeating itself this year.

“Super hot Texas really fueling the story too, similar to 2011,” he said.

Through most of the summer, which meteorologists measure as June 1 to Aug. 31, the heat has been centered over central US and the southern Great Plains, which has left Texas cooking and its electric grid struggling to meet demand. Dallas posted 21 days with temperatures of 100 degrees Fahrenheit (38 degrees Celsius) or more through July, and a cooling degree days value of 674 -- 163 above normal -- according to the National Weather Service.

Other parts of the US have avoided such baking heat. Chicago has had a monthly average temperature of 75.6 degrees Fahrenheit this July, slightly below normal, according to the weather service. New York’s Central Park is 2.3 degrees above average, though it was near normal before last weekend’s heat wave.

The Pacific Northwest has been cool most of the summer, though the heat is starting to seep into the region. Seattle’s high is expected to hover in the 90s for the rest of the week, while Portland, Oregon will hit 101 on Tuesday.