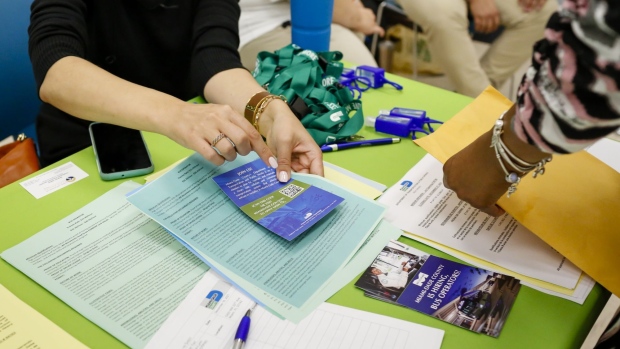 (Bloomberg) -- Applications for US unemployment insurance rose by more than forecast last week, though remained at a historically low level.

Initial unemployment claims increased by 29,000 to 219,000 in the week ended Oct. 1, Labor Department data showed Thursday. The prior week was revised down to the lowest level since April.

The median estimate in a Bloomberg survey of economists called for 204,000 new applications. The rise in claims was just the third increase since the end of July.

The four-week moving average, which smooths out volatile week-to-week moves, was little changed at 206,500.

Continuing claims for state benefits edged up to 1.36 million in the week ended Sept. 24.

The pickup in claims -- if sustained -- would suggest lackluster spending in various sectors and uncertainty about the economy’s prospects are prompting some businesses to lay off workers. That said, the level of applications remains low and continues to signal a robust labor market.

Data out earlier this week showed job openings plummeted in August by the most since early in the pandemic, indicating some softening in labor market conditions. Layoffs remain limited, but a growing number of firms in recent weeks including Robinhood Markets Inc., Microsoft Corp., Tesla Inc., Netflix Inc. and Ford Motor Co. have announced dismissals or plans to cut jobs.

“As the Fed moves rates deeper into restrictive territory and the labor market cools further, layoffs will drift higher toward year-end... Still, the level remains low by historical standards. Initial claims climbed to an average of 388k at the onset of the past five recessions (excluding the Covid-19 recession).”

The claims data precede Friday’s monthly jobs report, which is forecast to show employers added another 260,000 payrolls in September. While that would be the fewest jobs added in a month since a decline in late 2020, it’s still a robust advance and indicative of a strong labor market. The unemployment rate is seen holding near a five-decade low, and average hourly earnings are set for another solid advance.

On an unadjusted basis, initial claims increased to 167,083 last week. The advance was led by a jump in Puerto Rico after Hurricane Fiona devastated the territory in mid-September.

The impact of Hurricane Ian, which struck Florida and South Carolina last week, may be reflected in coming weeks’ data.

Missouri and Massachusetts also posted a rise in claims.