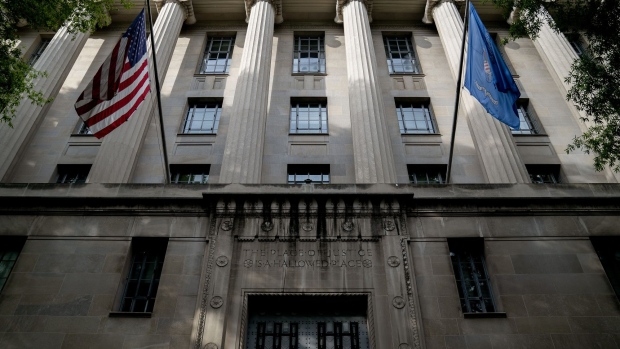 An American flag flies outside the Department of Justice building in Washington, D.C., U.S., on Monday, June 21, 2021. The White House plan for trillions of dollars in proposed spending and tax increases is entering a procedural and political thicket in Congress that's likely to take at least until September to clear. , Bloomberg

(Bloomberg) -- The Justice Department has requested access to transcripts of interviews conducted by the House committee investigating the Jan. 6 insurrection at the US Capitol.

The committee and department officials haven’t yet reached an agreement that could help advance a long simmering federal investigation into efforts to prevent the certification of Joe Biden’s victory in the 2020 president election, according to Representative Bennie Thompson, the Mississippi Democrat who chairs the panel.

The committee is investigating the deadly attack and the events leading up to it. The request for transcripts was reported earlier by the New York Times.

Thompson confirmed that the Justice Department had requested some transcripts, but did not detail which ones.

“My understanding is they had but we’ve not agreed to it,” Thomson told reporters at the Capitol.

The DOJ’s specific focus or target was not known. The committee during its 10 months in existence has interviewed over 1,000 people in private and collected more than 100,000 documents. Overall, it has issued 99 subpoenas for testimony and material.