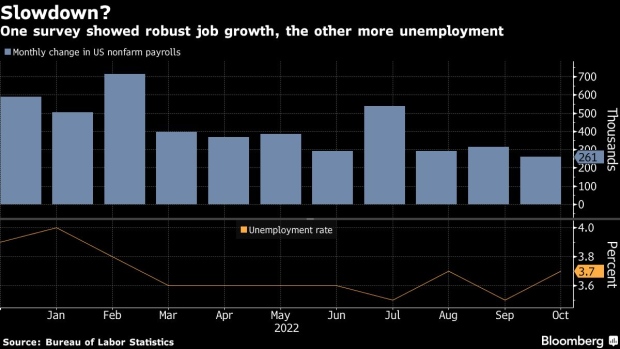 (Bloomberg) -- The remarkably resilient US jobs market is beginning to cool, but Friday’s employment report will fall far short of the turning point Federal Reserve officials are seeking in their battle to beat back inflation.

The median projection in a Bloomberg survey of economists calls for payrolls to rise 200,000 in November and hourly earnings to climb 4.6% from a year ago. There are signs labor demand is ebbing, but a bigger slowdown is needed to bring that demand more in line with labor supply in order to contain the wage growth that’s helped fuel inflation.

“The Fed has probably succeeded in stopping imbalances from getting larger” in the labor market, said Michael Gapen, head of US economics at Bank of America Corp. “We’re now all starting to look for reasons to suggest those imbalances are getting removed.”

Here’s a snapshot of the labor market leading up to the November jobs report:

The October jobs report suggested differing degrees of labor market cooling. The Bureau of Labor Statistics monthly employment report is made up of two surveys -- one of households and the other of businesses. Most of the time, they point in the same direction but that wasn’t the case in October.

Payrolls rose a stronger-than-expected 261,000 in the month after an upwardly revised September gain. And while that was the smallest advance since December 2020, the establishment figures indicated robust labor demand.

The survey of households, however, pointed to more joblessness. The number of employed Americans sank by 328,000 as the unemployment rate climbed to 3.7%.

While the projected gain in November employment represents a further moderation, it’s nonetheless historically strong. That said, data out Thursday from LinkedIn showed that hiring fell by 4.9% in November and was down 20.5% from a year earlier. Hiring is now also 11.8% below February 2020 levels.

Job openings fell in October, reversing a surprise jump in the prior month, according to data out Wednesday. While the figures suggest labor demand is moderating, vacancies still remain well above longer-run levels.

Fed Chair Jerome Powell said at an event Wednesday that while the drop in openings is a “positive thing,” the “jobs-workers gap is about four million.” He noted that the job market is only showing “tentative signs” of getting back into balance.

There were 1.7 job openings for every unemployed worker, a historically elevated figure, but matching the lowest ratio in year.

Still, data from LinkedIn suggest that figure may be overstating the tightness of the labor market. The company’s ratio of active job openings to active applicants, which takes into account the recruiting intensity by firms with vacancies, was 0.9 in September and October.

A slew of companies across industries such as technology, finance and real estate have announced thousands of layoffs in recent months, and the high-profile job cuts from companies like Amazon.com Inc. and Redfin Corp. have prompted many to worry about the health of the labor market.

According to a report by Challenger, Gray & Christmas Inc., employers announced 76,835 cuts in November -- more than double the October number.

The latest JOLTS data, which are for October, showed layoffs rose only modestly in the month. That said, the layoff rate for the information sector, where many tech jobs are concentrated, did increase.

Applications for unemployment benefits have begun to creep up as well. The four-week moving average, which helps to smooth out week-to-week volatility, has steadily increased since the end of September. For continuing claims, which are filings by those who have already filed an initial application, the average stands at an eight-month high.

Consumer surveys also paint differing pictures. The Conference Board’s November survey showed nearly 46% of Americans said jobs were “plentiful.” That’s lower than the share seen earlier this year when job openings were at record highs, but still a historically strong level and up from a month earlier.

Yet, looking ahead, that same survey showed a greater share of Americans expect fewer jobs in the next six months. Meanwhile, unemployment expectations sank to the worst level since 2011 in a University of Michigan survey of consumers.

Even so, four in 10 respondents saw zero probability of losing their job over the next five years. Another 31% said the likelihood was less than 25%.

Wages have generally pointed to a labor market that is moderating but remains extremely tight.

Average hourly earnings, while trending lower, remain elevated, with economists expecting a 4.6% year-over-year rise in November. Powell said that wage gains are running 1.5% to 2% above what would typically be consistent with the central bank’s inflation goals.

Private sector wage growth increased 5.2% in the 12 months through September, a step down from the 5.7% seen in the prior quarter but among the highest readings on record, according to the government’s employment cost index data.

The Federal Reserve Bank of Atlanta’s wage growth tracker has eased slightly from the record 6.7% seen over the summer, but remains extremely elevated at 6.4%.

“There are signs of moderation,” said Nick Bunker, head of economic research at Indeed Hiring Lab. “But there’s still lots of underlying resilience and strength in the labor market.”

--With assistance from Matthew Boesler.