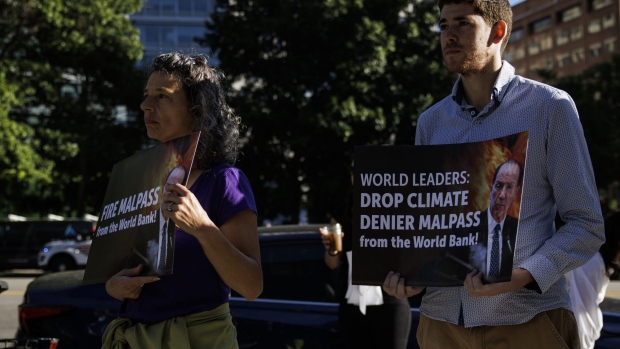 David Malpass, president of the World Bank, during a Bloomberg Television interview at the Jackson Hole economic symposium in Moran, Wyoming, US, on Friday, Aug. 26, 2022. Federal Reserve officials stressed the need to keep raising interest rates even as they reserved judgment on how big they should go at their meeting next month. , Bloomberg

(Bloomberg) -- Democratic lawmakers in the US urged President Joe Biden to seek the ouster of the Trump-appointed World Bank chief after he dodged questions on whether he accepted the scientific consensus that burning fossil fuels drives global warming.

The development lender’s president, David Malpass, 66, spent last week in damage-control mode, saying last Friday he “really wasn’t prepared” for being questioned about the effects of man-made emissions on climate change earlier in the week, when he answered “I don’t know. I’m not a scientist.” The questions came after former Vice President Al Gore labeled him a “climate denier.”

“His recent statements about climate change are troubling and we urge you to advocate for the removal or forced resignation of David Malpass as World Bank Group president,” more than 25 lawmakers including California Representative Jared Huffman, New York’s Alexandria Ocasio-Cortez, and Pramila Jayapal of Washington wrote in a letter to Biden, a fellow Democrat, dated Thursday. “People and governments now more than ever need a World Bank leader who listens to the science and is a global leader in combating climate change and adapting to the impacts that are unavoidable.”

In several interviews after the incident, Malpass said it’s clear that greenhouse gas emissions are coming from man-made sources.

The remarks by the World Bank president -- who was nominated to the post in 2019 by then-President Donald Trump, a Republican -- raised eyebrows within the Biden administration and sparked renewed criticism of both the lender and Malpass himself. Environmental activists had already been calling on the World Bank and other multilateral lenders, including the International Monetary Fund, to do more to accelerate clean-energy ventures and halt funding for fossil-fuel projects.

The US is the World Bank’s biggest shareholder and most influential voice when it comes to choosing the bank’s leadership. The White House disagrees with Malpass’s comments, Press Secretary Karine Jean-Pierre said last week, while deflecting questions about whether Biden has confidence in Malpass to lead the bank.

“We need a World Bank Group leader who fully appreciates the threat of climate change and the need to accelerate the global transition to a clean just energy future to improve living standards, reduce poverty, and encourage sustainable growth,” the lawmakers said in the letter.