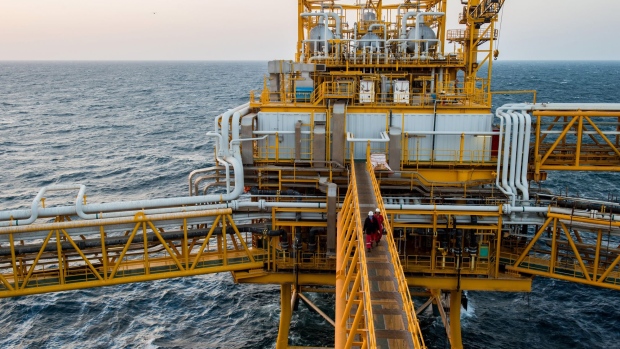 Workers cross a walkway between zones aboard an offshore oil platform in the Persian Gulf's Salman Oil Field, operated by the National Iranian Offshore Oil Co., near Lavan island, Iran, on Thursday, Jan. 5. 2017. Nov. 5 is the day when sweeping U.S. sanctions on Iran’s energy and banking sectors go back into effect after Trump’s decision in May to walk away from the six-nation deal with Iran that suspended them. , Bloomberg

The US may allow more sanctioned Iranian oil onto global markets even without a revival of the 2015 nuclear accord, according to the biggest independent crude trader.

While a new agreement would limit Iran’s atomic activities and ease US sanctions on its energy exports, talks between Tehran and world powers have stalled since March. Oil traders are increasingly pessimistic that negotiators will strike a deal.

Still, US President Joe Biden could decide that the need to bring down record-high pump prices ahead of November’s midterm elections outweighs the benefit of strictly enforcing sanctions, including by seizing more Iranian oil tankers.

“Uncle Sam might just allow a little bit more of that oil to flow,” Mike Muller, head of Asia at Vitol Group, said Sunday on a podcast produced by Dubai-based Gulf Intelligence. “If the midterms are dominated by the need to get gas prices lower in America, turning a somewhat greater blind eye to the sanctioned barrels flowing out is probably something you might expect to see. US intervention in these flows has always been pretty sparse.”

The US confiscated oil from an Iranian-flagged vessel off Greece last month, which was followed days later by Tehran detaining two Greek tankers in the Persian Gulf. But Washington’s move is unlikely to signal the start of more tanker seizures by the US, according to Muller.

Iran has raised oil exports this year, most of them ending up in China. A new nuclear deal would lead to an additional 500,000 to 1 million barrels per day coming on to international markets, enough to weigh on prices, according to energy analysts. The Islamic Republic also has around 100 million barrels of oil in storage that could be sold down quickly.

Crude prices have soared more than 50% this year to almost $120 a barrel, mostly because of the fallout of Russia’s invasion of Ukraine. While many Republicans and some Democrats oppose any lifting of Iranian sanctions, Biden is under plenty of pressure to lower gasoline prices, which have shot up to an average of more than $4.80 per gallon in the US.

There’s little consensus about the direction of oil prices, according to Vitol, which traded 7.6 million barrels of crude and refined products a day in 2021. While supplies are tight, Washington’s release of strategic reserves is helping balance the market.

Thursday’s decision by OPEC+ -- a 23-nation group of producers led by Saudi Arabia and Russia -- to accelerate output increases is unlikely to have much impact, Muller said. That’s because many members will struggle to pump more and Moscow’s exports could drop due to sanctions over the war in Ukraine.

There’s also a dichotomy emerging between richer and poorer countries, he said. Some in Asia such as Malaysia and Singapore are experiencing a demand rebound as coronavirus lockdowns ease. Others including Pakistan and Sri Lanka, which has defaulted on international bonds and is struggling to pay for fuel imports, are experiencing demand destruction.

“It’s a tale of two worlds,” Muller said. “The affluent world is going to have their holidays and burn jet fuel. But the impact elsewhere is a lot more profound. The divide between the prosperous and the countries that have a lower ability to pay for commodities is becoming extremely stark.”