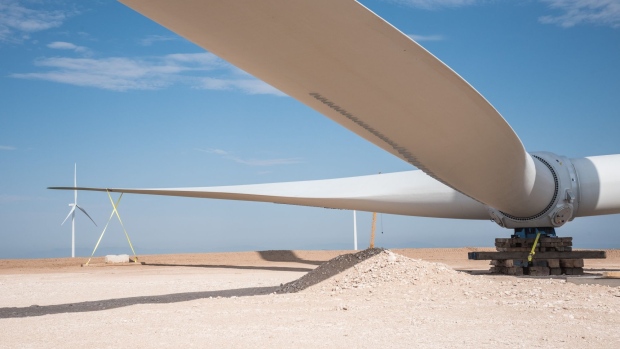 Rotor blades sit on the ground next to a wind turbine under construction at the Avangrid Renewables La Joya wind farm in Encino, New Mexico, U.S., on Wednesday, Aug. 5, 2020. The complex will eventually be equipped with 111 turbines and is scheduled to become fully operational by the end of this year. Photographer: Cate Dingley/Bloomberg , Bloomberg

(Bloomberg) -- The Biden administration will continue consultations with Mexico over the nation’s energy policy after completing the minimum time period required for talks under their trade deal rather than immediately requesting arbitration.

While Monday marked the end of an initial 75-day window to come to an agreement before the US has the right to ask for a dispute resolution panel, the 2020 US-Mexico-Canada Agreement on trade allows negotiations to be extended with the agreement of all parties.

The US after requesting the consultations in July and beginning them in August hopes “to maintain this positive momentum to resolve these concerns raised by US energy producers and to advance North American competitiveness,” a spokesman for the office of the US Trade Representative said in an emailed response to questions from Bloomberg News.

The US and Canada in July lodged complaints against the nationalist energy policy of the government of President Andres Manuel Lopez Obrador, arguing that it discriminates against their companies trying to operate in the Latin American country.

Mexico’s Economy Ministry in a statement said that it shared “the will of our partners to continue advancing through dialogue and without prejudice to the rights provided by the USMCA, we wish to continue joint efforts to explore a mutually satisfactory solution.”