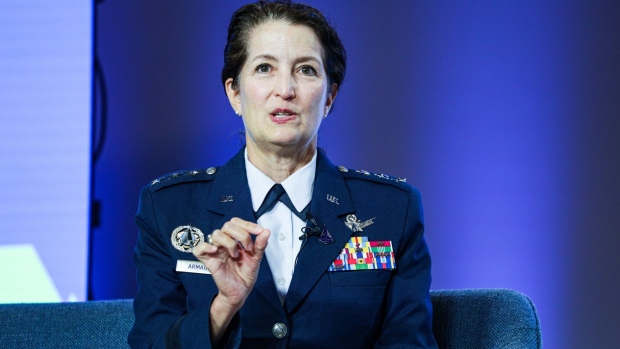 Nina Armagno, director of staff with the US Space Force, speaks during the US Chamber of Commerce's Global Aerospace Summit in Washington, D.C., US, on Wednesday, Sept 14, 2022. The summit will provide a forum for the industry's top leaders to publicly discuss the most pressing topics in air and space, according to the organizers. , Bloomberg

(Bloomberg) -- Australia is a critical asset for the US in the growing strategic competition with China over space, with top US military leaders warning Beijing’s technology is advancing “very, very quickly” to close the capability gap.

US Space Force’s Lt. General Nina M. Armagno said Australia’s geographical position and research capabilities represented a “pot of a gold at the end of the rainbow” for the two countries’ strategic interests in space defense.

Armagno, the Director of Staff for US Space Force, said Australia’s location in the southern hemisphere was vital to the US for “space domain awareness,” the ability to track and monitor all objects, satellites and debris in close orbit to the Earth.

“This is prime country for space domain awareness,” she said at an interview in Canberra on Thursday.

Speaking at the Australian Strategic Policy Institute, US Space Command Deputy Commander Lt. General John E. Shaw said the primary difficulty for his command was “understanding what is happening in our domain,” saying it took a “concerted effort” to regularly monitor the space around Earth.

The two generals were in Australia for meetings with their local counterparts and defense officials.

Australia and the US have strengthened their security relationship in recent years amid growing strategic competition with the Chinese government in the Asia Pacific. In September 2021, the US, UK and Australia announced a three-way security partnership which included a plan to work together to build Canberra a fleet of nuclear submarines by 2040.

At the same time, India and Japan have joined Australia and the US to reform the Quad partnership, a group designed to help regional democracies collaborate on China’s rise.

Shaw said while the Chinese government had fielded very few satellites even a few decades ago, Beijing’s space capabilities were rapidly becoming more sophisticated. “They’ve advanced very, very quickly,” he said. In January, China’s moon lander became the first to detect the presence of water on the orbiting body.

The deputy commander said Australia’s advanced research capabilities were particularly important to US space defenses. “Australia is a leader in quantum computing, we’re going to be using those kinds of technologies in the future,” he said.

Armangno said she believed the close alliance between the US and Australia, among other Western powers, was the “secret sauce” which the Chinese government lacked.