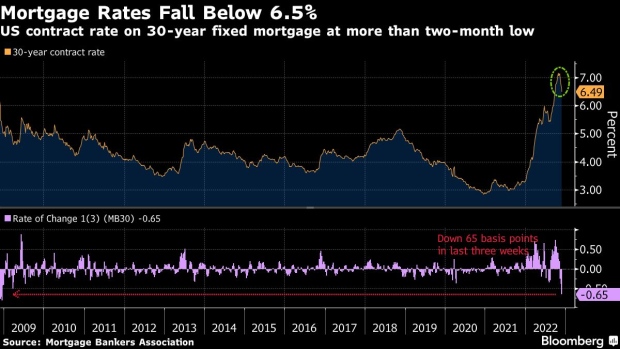 (Bloomberg) -- US mortgage rates declined last week to the lowest level in more than two months, extending a recent plunge that is providing modest relief to a weakened housing market.

The contract rate on a 30-year fixed mortgage fell 18 basis points to 6.49% in the week ended Nov. 25, the lowest since mid-September, according to Mortgage Bankers Association data released Wednesday.

The 30-year fixed rate has fallen 65 basis points in the last three weeks, the most over a similar period since 2008. With mounting concerns about a recession and signs that inflation is cooling, economists expect the Federal Reserve to slow the pace of interest-rate increases.

The decline in mortgage rates is helping to stabilize demand. The MBA’s mortgage purchase index increased 3.8%, the fourth-straight gain, to the highest level since the period ended Sept. 23.

The real estate sector is especially susceptible to higher borrowing costs, and the rapid rise in mortgage rates sidelined many potential buyers this year. High rates have also led to a sharp drop in refinancing, including an almost 13% slump in the latest week.

The decline explains a 0.8% decrease in the MBA’s overall measure of mortgage applications.

The MBA survey, which has been conducted weekly since 1990, uses responses from mortgage bankers, commercial banks and thrifts. The data cover more than 75% of all retail residential mortgage applications in the US.