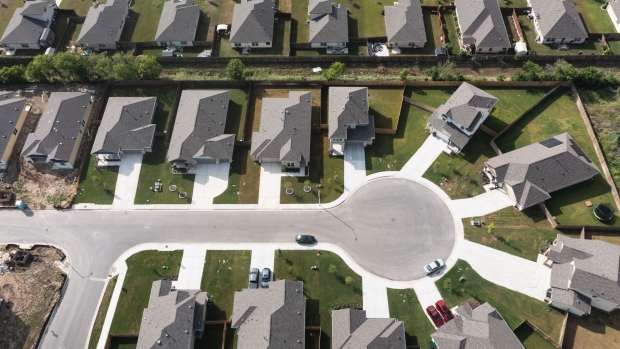 A residential neighborhood in Austin, Texas, US, on Sunday, May 22, 2022. The US pandemic housing boom, marked by record price gains and coast-to-coast bidding wars, is finally reaching its limit. , Bloomberg

(Bloomberg) -- US mortgage rates declined amid signs that inflation might have reached a peak.

This year’s run-up in mortgage rates has taken some of the froth out of the US housing market, slowing sales and easing bidding wars. It’s also pushed more buyers to cancel purchases and led homebuilders to slow construction starts. US inflation decelerated more than expected in July, which has eased some pressure on mortgage rates.

“Inflation appears to be beyond its peak, which has stopped the rapid increase in mortgage rates that the housing market was experiencing earlier this year,” said Sam Khater, Freddie Mac’s chief economist. “Over the rest of the year, purchase demand likely will continue to drag, supply will modestly increase, and home-price growth will decelerate.”

The housing slowdown has also sent ripples throughout the real estate industry, hitting mortgage lenders, homebuilders and other companies. The largest US brokerage, Compass Inc., announced sweeping cost-cutting measures this week, on top of an earlier move to cut its workforce by 10%.

Freddie Mac’s mortgage data is collected from Monday through Wednesday. On Mortgage News Daily, which updates the figure more frequently, the rate on a 30-year loan hit 5.48% late Wednesday.

“For today’s buyers, housing affordability is a critical challenge,” said George Ratiu, Realtor.com’s manager of economic research. “With wages rising at an average of 5.3% year-over-year, many Americans looking to buy a home are finding that goal slipping farther away.”