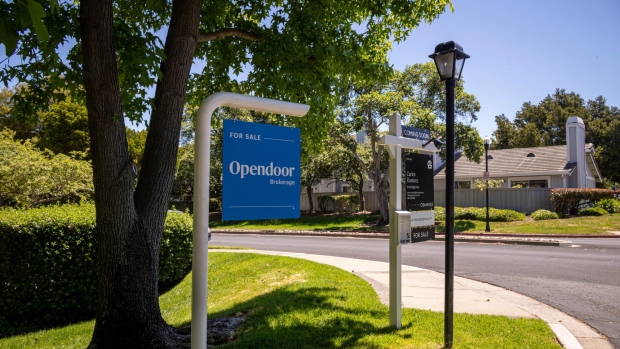 (Bloomberg) -- US mortgage rates retreated sharply for a second week, hitting a two-month low and providing a bit of traction for the beleaguered housing market.

The contract rate on a 30-year fixed mortgage decreased 23 basis points to 6.67% in the week ended Nov. 18, according to Mortgage Bankers Association data released Wednesday.

Rates have plunged nearly a half percentage point in the past two weeks, the most since 2008, as recession concerns mount, inflation shows signs of cooling and a number of Federal Reserve officials say it may soon be appropriate to slow the pace of monetary tightening.

Freddie Mac data on Wednesday also pointed to a decline in borrowing costs, with the rate on a 30-year fixed mortgage averaging 6.58% as of Nov. 23, down from 6.61% last week.

“In recent weeks, rates have hit above 7% only to drop by almost half a percentage point,” said Sam Khater, Freddie Mac’s chief economist. “This volatility is making it difficult for potential homebuyers to know when to get into the market.”

The slide in borrowing costs helped stir demand as the MBA’s index of applications to buy a home climbed 2.8%. That marked the third-straight increase since the gauge stumbled to the weakest level since 2015. New-home sales data also pointed to a rise in activity, with that measure unexpectedly climbing in October, government data showed Wednesday.

The pickup in demand allowed MBA’s overall measure of mortgage applications, which includes refinancing, to rise for a second week, but it still remains depressed. The index of refinancing activity edged up from a 22-year low.

The housing market has been pummeled this year by a rapid rise in mortgage rates. Minutes of the Fed’s meeting earlier this month may offer clues about the pace of upcoming interest-rate hikes and how high borrowing costs will ultimately go when released later Wednesday.

The MBA survey, which has been conducted weekly since 1990, uses responses from mortgage bankers, commercial banks and thrifts. The data cover more than 75% of all retail residential mortgage applications in the US.

(Updates with Freddie Mac data starting in the fourth paragraph.)