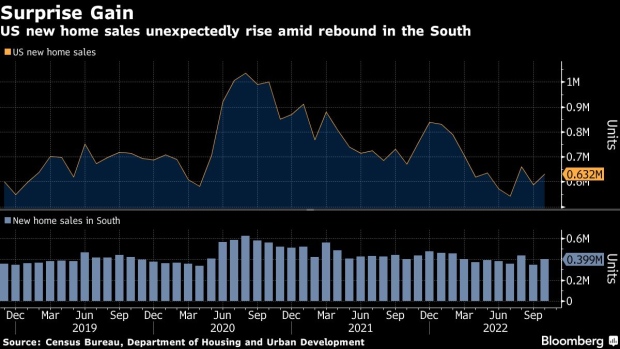 Housing under construction in Atlanta, Georgia, US, on Sunday, Nov. 13, 2022. Redfin Corp. is shuttering its iBuying business and laying off workers for the second time in almost five months, as the likelihood of a prolonged US housing slowdown continues to ripple through the industry. , Bloomberg

(Bloomberg) -- Sales of new US homes unexpectedly rose in October, largely driven by an increase in the South and likely representing a pause in an otherwise weak housing market.

Purchases of new single-family homes increased 7.5% to an annualized 632,000 pace last month after falling in September, government data showed Wednesday. The median estimate in a Bloomberg survey of economists called for a 570,000 rate.

Sales in the South rebounded after a sharp retreat a month earlier when Hurricane Ian slammed into Florida and parts of Georgia and South Carolina. The October pace in the South was still slower than in August.

Even with the surprising pickup in sales, buyer demand has rapidly evaporated this year amid the Federal Reserve’s aggressive interest rate hikes to tame inflation. Mortgage rates, which topped 7% by the end of October, have more than doubled this year. That’s put a brake on sales and construction while also helping to push down home prices.

Looking ahead, though, a recent drop in mortgage rates may help to stabilize housing demand. The 30-year fixed mortgage rate has dropped nearly a half percentage point in the past two weeks, the most since 2008 according to Mortgage Bankers Association data released Wednesday.

In addition to the 16% sales pickup in the South, demand in the Northeast also increased. Purchases in the Midwest and West fell.

The report, produced by the Census Bureau and the Department of Housing and Urban Development, showed the median sales price of a new home rose 15.4% from a year earlier, to $493,000.

There were 470,000 new homes for sale as of the end of last month, though the overwhelming majority remain under construction or not yet started. The number of for-sale dwellings under construction, however, was the smallest in six months. At the current sales pace, it would take 8.9 months to exhaust the supply of new homes.

Earlier this month, Michael Murray, co-chief operating officer at D.R. Horton Inc., one of the largest US homebuilders, said the company closed fewer homes than expected in the latest quarter due to slower sales, more cancellations and continued construction delays.

New single-family home construction declined in October to the slowest pace since May 2020, according to government data last week. Permits also declined, and homebuilder sentiment has declined every month this year.

The number of homes sold in October and awaiting the start of construction -- a measure of backlogs -- increased to the highest level since January.

The new-homes data are volatile; the report showed 90% confidence that the change in sales ranged from a 13.3% decline to a 28.3% increase.