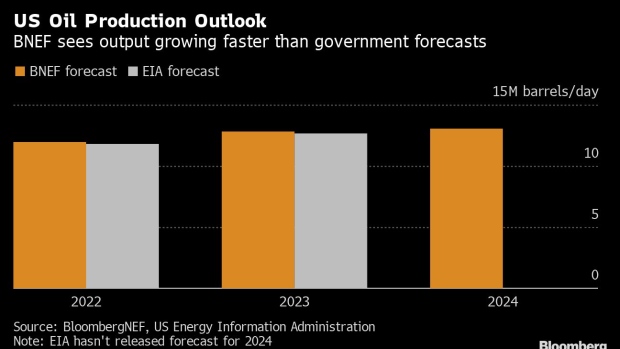 (Bloomberg) -- The US is on track to grow oil production faster than the government is forecasting, according to a BloombergNEF analysis.

The latest BNEF report estimates daily US oil output to increase by more than 900,000 barrels next year. The expected production of 12.85 million barrels of crude per day exceeds the Energy Information Administration’s forecast by 250,000 barrels.

The outlook for domestic oil production growth next year “looks solid and has resiliency despite recent commodity price volatility, mostly because US oil plays have low break-even prices,” said BNEF analyst Tai Liu, who authored the report. The prospect for prices to spike once European Union sanctions on Russian oil take effect, as well as a global need for reliable energy access will continue to support production growth, the analysis shows.

Mounting concerns over a global recession have caused oil prices to recently sink, with futures earlier this week touching the lowest levels since January. Prices would have to slip below $50 a barrel before oil producers change their plans for 2023, according to the report.

The US may see slowed production growth in 2024 if producers do not complete more wells. This could further tighten markets, especially if oil demand recovers in the next two years. The Organization of Petroleum Exporting Countries and its partners already have limited capacity to raise output, Liu noted.

The report also noted that the EIA’s production estimates have been lower than previous BNEF forecasts. The EIA may be undercounting oil supplies, as the agency’s supply adjustment -- which includes any remaining crude that could not be otherwise categorized -- has been high compared to regular seasonal levels, the report found.