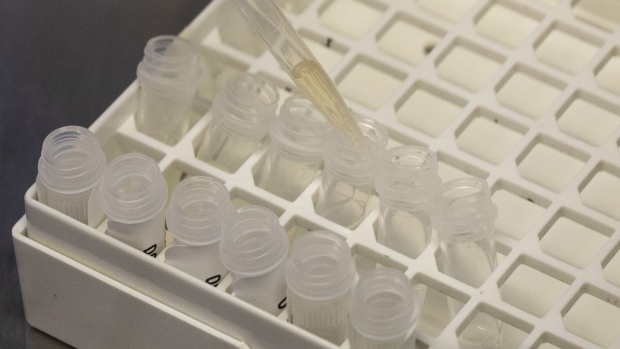 (Bloomberg) -- Bavarian Nordic A/S, the only company with an approved vaccine specifically for monkeypox, won another order from the US government as the virus continues to spread.

The Danish drugmaker will supply 2.5 million doses of Jynneos vaccine to US authorities in the last quarter of the year and in 2023, the Department of Health and Human Services said Friday in a statement. The order brings the total number of doses to be delivered this year and next to more than 4 million, HHS said. Bavarian’s shares rose 3.9% in Copenhagen.

There were 396 US monkeypox cases as of Thursday and more than 5,300 globally, according to the Centers for Disease Control and Prevention. While experts have expressed concern over the growing outbreak, the World Health Organization stopped short of declaring a public health emergency at a committee meeting on June 25. However, “the rapid evolution and emergency nature of the event” mean the committee will soon reconvene to reconsider the decision, Hans Kluge, the WHO’s regional director for Europe, said Friday.

Small numbers of cases have newly been reported among “household members, heterosexual contacts, and non-sexual contacts as well as among children,” Kluge said.

The US has said that it plans to vaccinate eligible Americans, and is looking to study the use of Bavarian Nordic’s vaccine in children. Right now, the government is still prioritizing men who have sex with men who have been exposed to the virus in states with the highest infection rates.

On Thursday, some states announced they had secured vaccine doses to soon be delivered -- New York was allocated 8,195 Jynneos doses, with the bulk of those going to New York City. Health officials in Illinois said Chicago would get 3,200 vaccine doses, with another 1,200 going to the rest of the state.

The US also has supplies of Emergent BioSolutions Inc.’s ACAM2000 smallpox vaccine, which can be used against monkeypox if necessary. However, the government has prioritized ramping up supply of the Jynneos vaccine because ACAM2000 is not recommended for people with weakened immune systems and has some serious side effects.

“This order of additional Jynneos vaccine will help us push out more vaccine quickly, knowing that we have more doses on the way in the coming months,” HHS Secretary Xavier Becerra said in the statement.

Bavarian has a long history of supplying its vaccine to the US, initially for smallpox, for which is was originally developed. Since the outbreak of monkeypox in Europe and the US, Bavarian has received several orders from governments seeking to protect their populations.

The company will produce the additional doses in liquid frozen form using vaccine already manufactured in bulk under an existing 10-year contract with the Biomedical Advanced Research and Development Authority, HHS said. That contract was already part of its ongoing national preparedness efforts against smallpox. A company spokesperson for Bavarian said the US government has access to 15 million Jynneos doses in bulk form.

The US government’s initial order of 1.6 million vaccine doses is just “a drop in the bucket,” Luciana Borio, former director for medical and biodefense preparedness at the US National Security Council, said. Even with the additional order of 2.5 million doses announced today, Borio is worried the increased global demand for Jynneos and Bavarian’s limited manufacturing capacity in Denmark could cause problems for the US down the line.

“We know, especially given our experience with with Covid, that there will be significant competition for this product,” Borio said. “We should be making sure that we have the capacity to manufacture domestically, which is also an opportunity for us to contribute to the global need.”

The US government has long been one of Bavarian’s primary customers, Borio said, and she thinks the company should consider transferring its Jynneos vaccine tech to a US manufacturer to help augment supply as the outbreak continues to grow.

A spokesperson for Bavarian said the company is “currently exploring contingencies should the need arise” but that at the moment demand doesn’t exceed capacity. No orders have been turned down from countries that have requested the shots as of yet, the spokesperson said.

(Updates with comments from Bavarian Nordic in final paragraph.)