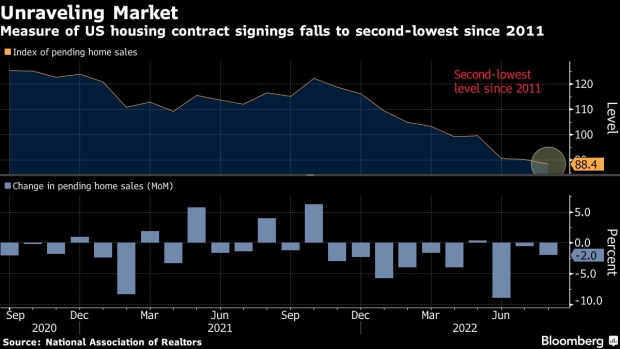 A "Sold" sign in the window of a home under construction in the Ellerbe Estates subdivision in Dalzell, South Carolina, U.S., on Tuesday, July 6, 2021. U.S. pending home sales unexpectedly rose in May by the most in nearly a year as low borrowing costs paired with increased listings bolstered demand. Photographer: Micah Green/Bloomberg , Bloomberg

The National Association of Realtors’ index of contract signings to purchase previously owned homes decreased 2% last month to 88.4 -- the lowest since 2011, excluding the immediate aftermath of the pandemic -- according to data released Wednesday. The median estimate in a Bloomberg survey of economists called for a 1.5% drop.

The housing market has been unraveling as the Federal Reserve continues its aggressive path of interest-rate hikes to combat inflation, pushing mortgage rates up to the highest since 2008. That’s weighed on demand as well as builder sentiment, pointing to muted new construction activity to come.

A report earlier Wednesday showed a measure of mortgage applications fell last week to the lowest level since 1999. Separate data Tuesday showed a national measure of prices in 20 large cities fell in July, the first drop since March 2012.

“The direction of mortgage rates -- upward or downward -- is the prime mover for home buying, and decade-high rates have deeply cut into contract signings,” Lawrence Yun, NAR’s chief economist, said in a statement. “Only when inflation calms down will we see mortgage rates begin to steady.”

Contract signings decreased in three of four regions while the West posted a small increase, similar to July’s data.

Compared with a year earlier, contract signings were down 22.5% on an unadjusted basis.

Pending home sales are often looked to as a leading indicator of existing-home purchases given properties typically go under contract a month or two before they’re sold. Sales of previously owned homes, calculated when a contract closes, fell for the seventh straight month in August.