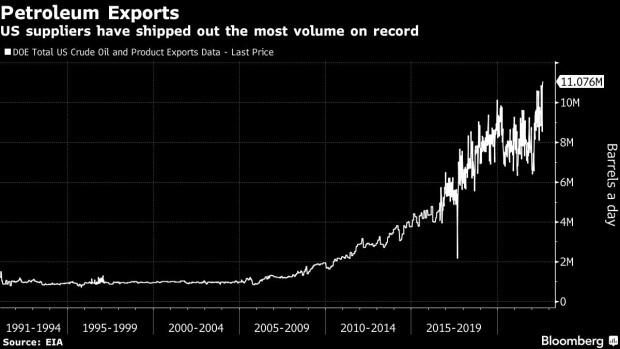 The Marathon Petroleum Galveston Bay Refinery in Texas City, Texas, US, on Tuesday, Aug. 2, 2022. Marathon Petroleum Corp., the largest US fuelmaker, made more money in the second quarter than in any of its previous years since becoming an independent refiner over a decade ago. , Bloomberg

(Bloomberg) -- The US shipped out the most crude and refined-oil products in three decades as energy-starved economies increasingly turn to American supplies to stave off shortages.

More than 11 million barrels of crude and products such as diesel fuel left US ports on a daily basis last week for overseas markets, government data showed on Wednesday. That was the most in data going back to February 1991.

Diesel led the surge with a 20% jump in exports while crude outflows exceeded 4 million barrels day for a second straight week -- the first time that’s happened since lawmakers lifted a decades-old export ban in late 2015.

Europe and Asia are grappling with some of the worst energy crises in history, and oil supplies could soon get tighter. Saudi Arabia’s oil minister earlier this week said the OPEC+ alliance would consider production cuts to address the dislocation between futures trading and fundamental supply-and-demand forces.