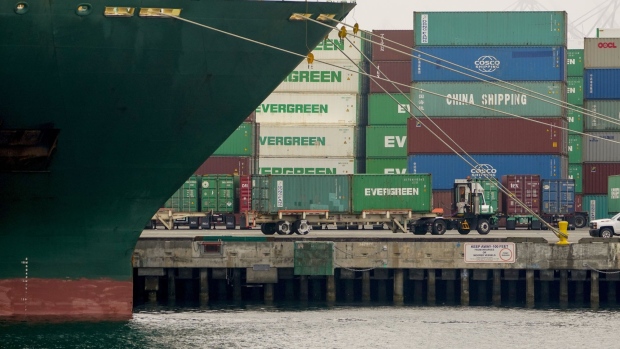 (Bloomberg) -- The US is preparing to escalate its complaints that Mexico’s state-favoring energy policies violate the nations’ free-trade agreement, people familiar with the matter said, a move that would risk exacerbating tensions between the countries’ governments.

US Trade Representative Katherine Tai’s office in recent weeks has been working on a request for formal consultations under the US-Mexico-Canada Agreement and discussing it with other agencies, according to the people, who asked not to be identified without permission to speak publicly. The timing for the request is still being determined, the people said.

Under USMCA rules, such a request would give Mexico up to 30 days to agree to schedule consultations. If after 75 days no agreement is reached, the US could request that a formal panel hear arguments from the two nations. While that process focuses on getting Mexico to agree to corrective actions, dragged-out conflicts can ultimately lead to the US imposing punitive tariffs on imports from Mexico on the two-year-old trade pact.

An escalation now may risk angering Mexican President Andres Manuel Lopez Obrador ahead of a planned visit to Washington in the coming weeks, after he snubbed President Joe Biden’s invitation to the regional Summit of the Americas in Los Angeles earlier this month.

Lopez Obrador, known popularly as AMLO, hails from the oil-rich state of Tabasco and is a fierce champion of the national crude and electricity companies. The White House visit was announced two weeks ago on the same day that Lopez Obrador said he would skip the Los Angeles summit because Cuba, Venezuela and Nicaragua were excluded due to democracy and human-rights concerns.

Mexico’s cooperation is also key to addressing a surge in undocumented migration that’s a political vulnerability for Biden heading into midterm elections in November.

Lopez Obrador is a longtime critic of an overhaul enacted under his predecessor in 2013-2014 that ended almost eight decades of energy nationalization. Since taking office in late 2018, he’s worked to return the state-owned oil and gas producer Petroleos Mexicanos, known as Pemex, and power company CFE to their former glory by adopting policies that hurt private-sector participants in the industry.

The USMCA trade deal, mostly negotiated by the previous Mexican government but ultimately agreed to by Lopez Obrador, sought in part to protect private investors against an unwinding of the energy-industry opening.

Following repeated complaints by dozens of lawmakers, Tai warned in a March letter to her Mexican counterpart, Economy Minister Tatiana Clouthier, about US concerns that shifts in Mexico’s energy policy -- including changes in electricity law to favor state-owned power plants over private producers -- violate the USMCA’s core obligations.

US energy companies continued to face arbitrary treatment in Mexico, with more than $10 billion in US investment in the nation put at risk, much of it in renewable energy, Tai said.

Tai said then that she was considering all available options under the USMCA to address the concerns.