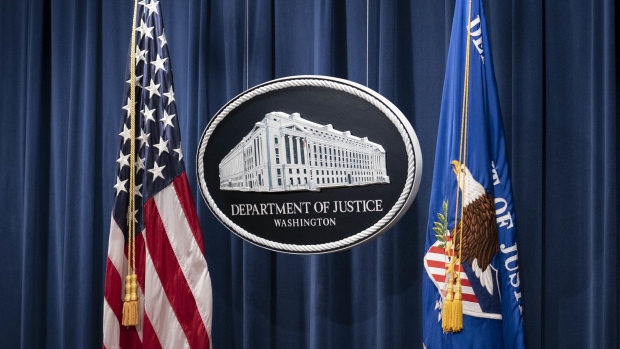 Department of Justice signage during a news conference in Washington, D.C, U.S., on Tuesday, Jan. 12, 2021. The agencies provided updates on charges related to last week's events at the U.S. Capitol. , Bloomberg

(Bloomberg) -- A London-based oil trading company is being investigated by the US Department of Justice for potential manipulation of fuel prices.

Dare International Ltd., which has quickly risen to become a major player in fuel oil derivatives, has been under scrutiny by federal prosecutors since at least last year, according to people familiar with the matter. Trading by the company, which in 2021 changed its name from Vercer Ltd., is also being examined for potential manipulation by the Commodity Futures Trading Commission, the people said.

A focus of the investigation is on Dare’s activity during a key trading window known as the “Market on Close,” they said. In a document seen by Bloomberg that was emailed to employees in 2018, Dare said traders should seek “to print the highest level on flat price just prior to 9:30 a.m.” in London. That’s an important time of day because it’s when S&P Global Platts determines the physical price of commodities affecting billions of dollars of derivatives and transactions.

Dare’s email noted that “with the sizes we’re taking down, a two tick move in the assessment can be seriously significant” for trading results. Printing a high level at the close refers to the assessment prices that Platts sets, which are often defined by the final trades, bids or offers for a commodity.

Headline prices for oil and fuel futures are ultimately anchored by physical assessments and a web of associated derivatives. Brent futures rose to about $94 a barrel on Thursday, boosted by production cuts that the OPEC+ alliance announced Wednesday.

No charges have been brought against Dare to date and one of the people said the investigations are at an early stage.

Spokespeople for the Justice Department and the CFTC declined to comment. Lawyers for Dare said the company was unaware of any investigations into its trading.

The company was established in 2016 and two of its co-founders, Chief Executive Officer Ayman Rahman and Chief Investment Officer Jono Ooi remain at the helm. Its biggest business has historically been trading fuel oil, a product used in power generation and merchant shipping.

From an office in the City of London, the company has grown to become one of the three-largest participants by volume in the fuel oil derivatives market, regularly competing with established multinationals like Shell Plc and Vitol Group, according to traders and brokers. Its accounts for the year ended 2020 showed the firm employed about 50 people, of which 21 were traders.

US authorities have recently been focusing intently on companies who look to unduly influence closing prices, a practice that the CFTC calls “banging the close.” Glencore Plc was recently sentenced to $486 million in fines and forfeiture for conspiring to manipulate US oil-price benchmarks, including the Platts fuel oil market.

Closing price assessments are a vital cog in physical oil and fuel markets. They underpin derivatives and can be used to settle transactions and long-term contracts between two counterparties. As such, it’s important they reflect realistic trading or those other deals could become distorted.

As well as bold trading at market closes, staff looked to cultivate relationships with brokers to receive early information about order flows, according to former employees.

Some said they were told to insist that brokers provide the names of their counterparties on the other side of trades.

The 2018 email was distributed among Vercer staff after one brokerage told the trader that it anticipated having buy orders all month, meaning strong bidding.

“We should refine this and get everyone’s roles crystal clear as soon as we can,” the email said. “Don’t think we should circulate this because it does seem like a real moneymaker.”