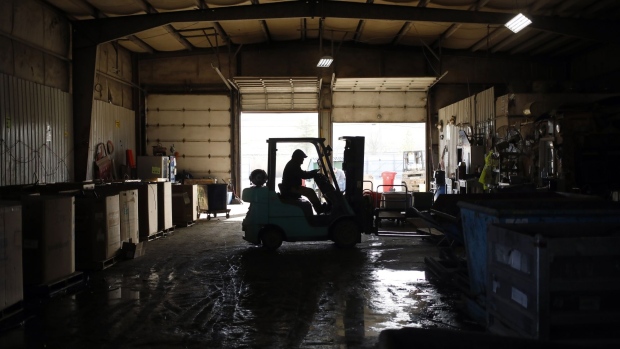 A worker drivers a forklift at a metal recycling center in Louisville, Kentucky. , Bloomberg

(Bloomberg) -- US producer prices rose in November by more than forecast, driven by services and underscoring the stickiness of inflationary pressures that supports Federal Reserve interest-rate increases into 2023.

The producer price index for final demand climbed 0.3% for a third month and was up 7.4% from a year earlier, Labor Department data showed Friday. The monthly gains for October and September were revised higher.

At the same time, the annual increase was the smallest in 18 months, extending a months-long easing and suggesting the central bank still has scope to pause its rate hikes next year as expected. Cooler demand at home and abroad has taken some stress off supply chains.

The data come just days before the release of the closely watched consumer price index, which is forecast to show inflation, while much too high, continues to decelerate.

The median estimates in a Bloomberg survey of economists called for the index to be up 0.2% in November and 7.2% from 2021.

Excluding the volatile food and energy components, the so-called core PPI rose 0.4% in November and increased 6.2% on an annual basis.

With core-goods inflation easing, attention is shifting to price growth in the services side of the economy. The housing components, which are currently a key driver of consumer inflation, are expected to eventually turn, but wages may prove key to the ultimate path of inflation.

The S&P 500 opened lower while Treasury yields jumped and the dollar fluctuated.

Fed Chair Jerome Powell said in a recent speech that core services ex-housing, as measured by an index tied to personal consumption, “may be the most important category for understanding the future evolution of core inflation.” And that the “labor market holds the key to understanding inflation in this category.”

Producer prices excluding food, energy, and trade services — which strips out the most volatile components of the index — increased 0.3% from the prior month and 4.9% from a year earlier. The annual gain was the smallest since April 2021.

Costs of processed goods for intermediate demand, which reflect prices earlier in the production pipeline, fell for a fifth month, led by a drop in energy goods. More than a third of the decline was attributed to cheaper diesel fuel.

Separate data have also pointed to a sustained easing of cost pressures. The Institute for Supply Management gauge of prices paid for raw materials by manufacturers fell last month to its lowest level since May 2020. And a S&P Global composite gauge of input prices eased for a sixth-straight month.