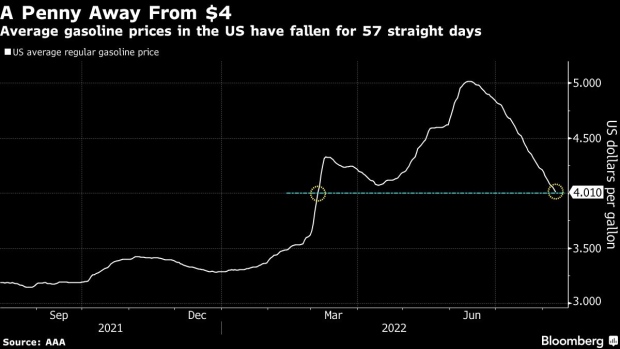 (Bloomberg) -- Pump prices in the US are on the cusp of falling below $4 a gallon for the first time since early March, slowing inflation growth.

Pulled lower by sinking oil prices and a slowdown in summertime demand, the average domestic retail price for regular gasoline hit $4.01 a gallon overnight after more than eight straight weeks of declines, according to data from auto club AAA. The advance in the consumer price index decelerated last month, cooling from a 9% rise in June when fuel prices hit multiple record highs.

The worst inflation in decades has been squeezing household budgets and punishing gasoline demand. By one measure, fuel consumption is lower than it was during the summer of 2020 when the country was in the throes of the pandemic. That has prompted the Energy Information Administration to cut its full-year demand forecast.

The steady decline in retail gasoline comes after pump prices hit a record $5.016 a gallon on June 13. Oil prices, the main driver of gasoline costs, have been in retreat as traders brace for recession and the US government released crude from its emergency reserves to enhance supplies.