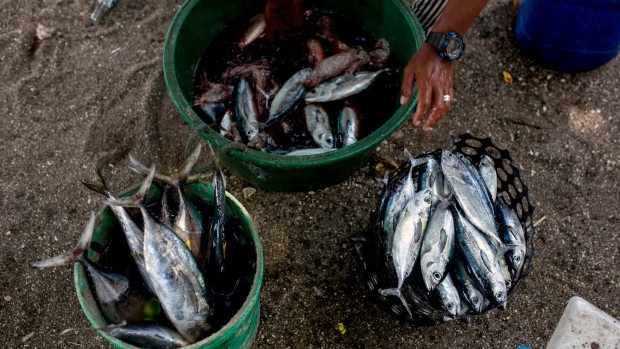 A fisherman handles freshly-caught fish at San Agustin village in Iba town, the Philippines, on Saturday, July 6, 2019. Fishermen are on the front lines of Asia’s most complex territorial dispute, which involves six claimants and outside powers like the U.S. with an interest in protecting a waterway that carries more than $3 trillion in trade each year. Photographer: Geric Cruz/Bloomberg , Bloomberg

(Bloomberg) -- The US is joining Japan, India and Australia in a new program aimed at curbing illegal fishing as concern grows about the practice by Chinese vessels.

The initiative, set to be announced Tuesday, will allow the tracking of dark shipping and fishing -- in which ships turn off transponders --  in the Indo-Pacific region, a senior administration official told reporters Tuesday.

The announcement coincided with a meeting of the leaders of the four-nation security grouping, known as the Quad, on the final day of US President Joe Biden’s first trip to Asia since taking office.

The fishing initiative -- first reported by the Financial Times -- comes amid concerns Beijing is negotiating new security deals with Pacific nations following its agreement with the Solomon Islands last month.

In addition to curbing illegal fishing, the initiative will help safeguard territorial sovereignty and aid with sea rescue missions, said the official, who spoke on condition of anonymity ahead of a formal announcement.

It will cover the Pacific islands, Southeast Asia and the Indian Ocean region in the Indo-Pacific, the official said.

Rampant illegal fishing has become a growing concern over the years as Chinese fleets part of the world’s largest fish producing nation are increasingly found in waters claimed by far-flung nations, while contributing to overfishing and pollution.

Biden has sought to use his Asia trip to boost regional ties as a means to counter China’s clout, including with a new economic framework that a dozen Indo-Pacific countries publicly signed onto Monday.