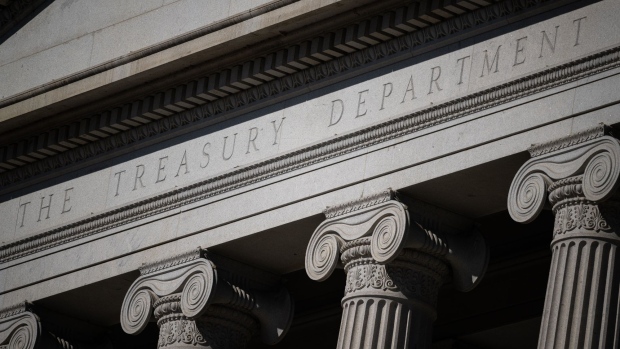 The US Treasury Department in Washington, DC, US, on Wednesday, Nov. 9, 2022. The Republican wave that was supposed to undo Joe Biden's presidency failed to arrive as GOP candidates were projected to dominate Tuesday's midterm elections, with polls showing voters bitter about the state of the economy. Photographer: Graeme Sloan/Bloomberg , Bloomberg

(Bloomberg) -- The US Treasury Department sanctioned several entities linked to China’s illegal fishing industry, including a company listed on a US stock exchange, the first time the agency has taken such an action.

Pingtan Marine Enterprise, Ltd., which trades on the Nasdaq exchange as PME, has a market capitalization of approximately $56 million and most of its shares are held by its owner, Xinrong Zhuo, who was also sanctioned. US investors have 90 days to unwind their positions, according to Treasury guidance, and are prohibited from selling them back to Zhuo. Trading of PME was halted Friday.

Beijing rejected the US allegations before the sanctions were announced. “The US is in no position to impose unwarranted sanctions on other countries or act as a ‘world policeman’,” said Mao Ning, a spokeswoman for the foreign ministry at a regular press briefing on Friday when asked by a Tass correspondent about a report in the Wall Street Journal. “China will act resolutely to safeguard its lawful rights and interests.”

The ministry had no comment after the sanctions announcement.

The sanctions on Chinese companies stem from an executive memorandum President Joe Biden signed in June to combat illegal and unregulated fishing globally. The measures ultimately targeted more than 150 fishing vessels on which the US said significant abuses have occurred.

The Treasury said China’s fishing practices violated applicable laws and regulations, were misrepresented or misreported to authorities and harmed the environment. It wasn’t immediately clear which treaties governing fishing in international waters the companies or their vessels might have violated.

“Treasury condemns the practices of those sanctioned today, which often involve the abuse of human rights, undermine fundamental labor and environmental standards, and harm the economic prospects of local populations in the Indo-Pacific,” said Brian E. Nelson, the under secretary for terrorism and financial intelligence.

The US has championed efforts to fight illegal fishing in the Pacific as part of a broader push to demonstrate the benefits of its presence to the region. Coastal states around the globe have complained about overfishing by Chinese fleets, sometimes supported by armed coastguard vessels.

The action was followed by a broader set of sanctions against China, Russia and other countries that the US rolled out to mark Human Rights Day.

The sanctions against Russia focused on individuals who facilitated so-called “filtration” operations in Ukraine, in which civilians fleeing combat have been subjected to interrogation and confiscation of personal data. The US also sanctioned members of Russia’s Central Election Commission involved in referendums in contested areas of Ukraine.

A majority of the sanctions unveiled Friday were levied under the Global Magnitsky Act, a law that expanded the use of economic sanctions to cases of human rights violations. They included sanctions on more than 40 individuals and entities across nine countries, including North Korea, El Salvador, Guatemala, Guinea, Iran, Mali and the Philippines.

The US has levied hundreds of sanctions against individuals, companies and government entities in Russia. Almost all of the Russian legislature is under some form of Western sanctions and several high-ranking government officials, including the head of the central bank, have been sanctioned.

The measures have weakened the country’s economy, with officials projecting a contraction over the next two years. In testimony before the Senate Foreign Relations Committee, Assistant US Treasury Secretary Elizabeth Rosenberg pointed to a 35% drop in Russia’s stock market since the start of the war and told senators that Russia has had to turn to Iran and North Korea for weapons because of the export controls imposed by the US and its allies.

However, they’ve failed to compel Russia to give up its invasion and have had little to no effect on Russia’s ability to fund its war with energy sales.

--With assistance from Jacob Gu.