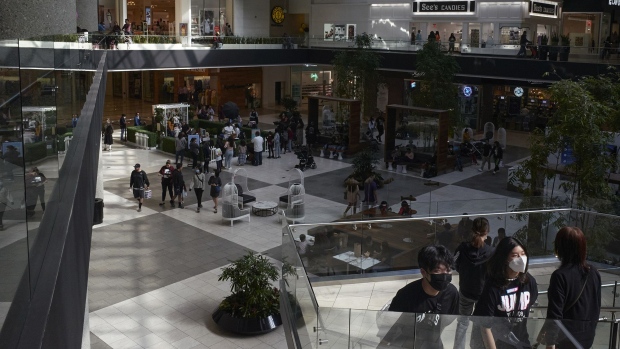 The median estimate in a Bloomberg survey of economists had called for an 1% increase in overall retail sales from a month earlier and a 0.7% jump in the figure excluding autos and gas stations.

The data suggest that Americans are still spending on merchandise at a rapid clip even as prices rise at the fastest pace in decades. That said, economists expect consumer spending to shift away from goods and toward services like travel and entertainment as pandemic-related health concerns wane and demand for summer activities picks up.

Consumer spending is by far the biggest contributor to the US economy, and it may fall in the coming months due to the end of federal stimulus, rising interest rates and declining savings. On Sunday, Goldman Sachs Group Inc. economists cut their forecasts for US growth for this year, noting that outlays may slow in response to tighter financial conditions and higher prices.

Nine of the 13 retail categories showed growth last month, per Tuesday’s release. While the increases could reflect strong demand for merchandise, the gains could also be a result of higher consumer prices, since the retail sales data aren’t adjusted for inflation. Real spending data will be released next week.

To keep pace with price increases, consumers are loading up on their credit cards, according to Federal Reserve data. Borrowing in March soared by the most on record, and a separate report from the New York Fed showed Americans opened a record 537 million credit card accounts in the first quarter.

Spending at gas stations fell in April, likely reflecting lower prices in the month after a spike in March stemming from Russia’s invasion of Ukraine. This month, gas prices have begun to rise again, which is likely to lead to an increase in the category when the May data are released. Motor vehicle purchases, meanwhile, climbed 2.2%.

Receipts at grocery stores decreased 0.2%. Restaurant sales, the report’s only services component, increased 2% after 1.9% in the prior month.

Sales at non-store retailers, which tend to be volatile from month to month, rose 2.1% in April after 0.4% in the prior month.