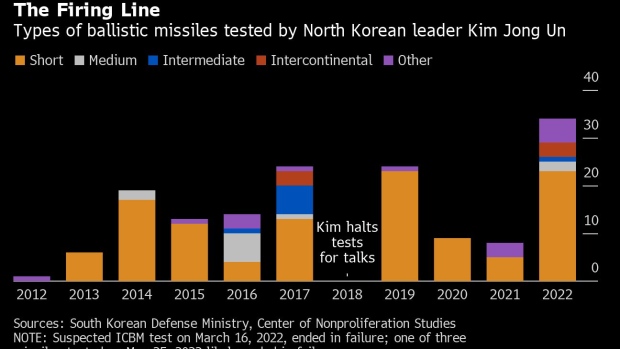 The missiles were fired Thursday from an area north of Pyongyang about five hours after Harris entered a hut from the South Korean side of the DMZ. The visit makes Harris the highest-ranking member of the Biden administration to enter the 4-kilometer (2.5-mile) wide buffer where hundreds of thousands of troops are stationed on opposing sides of razor-wire fencing in a place dubbed the Cold War’s last frontier.

The launch, coming shortly after Harris left the country, followed a single, short-range missile fired Sunday, and two others on Wednesday. The volleys were the first of the sort since June and added to the record launches this year by Kim Jong Un’s regime, which has not made a comment on its weapons tests this week or on Harris’s visit.

During her trip to the DMZ, Harris stood on the South Korean side of the demarcation line border while North Korean soldiers kept close tabs. Harris earlier held talks in Seoul with President Yoon Suk Yeol, where they denounced North Korea’s missile launches and pledged tough action if Pyongyang went ahead with its first test of a nuclear device in five years.

“The commitment of the United States to the defense of the Republic of Korea, I will report, is ironclad,” Harris said at the DMZ, referring to South Korea by its formal name and saying the North Korean launches were “clearly a provocation.”

She added the DMZ shows the paths the two Koreas took after their 1950-1953 war, with South Korea becoming a thriving democracy and North Korea becoming “a brutal dictatorship” with rampant human rights violations and an unlawful weapons program that threatens peace.

The DMZ visit offered the chance for Harris to show she can tackle delicate relationships abroad, while burnishing her foreign policy credentials ahead of the 2024 presidential race. The visit also included meeting service members and receiving an operational briefing.

Yet Harris stumbled a bit in her remarks at the DMZ, at one point mistakenly saying that the US shares a “very important relationship, which is an alliance with the Republic of North Korea.” The Republican National Committee seized on the gaffe, tweeting a clip of the remarks, which were also featured on Fox News.

The trip put attention on North Korea’s return to provocations and signaled support for allies in the region, including the two that host the bulk of US troops in the region -- South Korea and Japan. The three are due to hold joint naval exercises from Friday, which should anger Pyongyang.

Japan’s defense minister and South Korea’s Joint Chiefs of Staff both said North Korea fired two, short-range ballistic missiles Thursday. South Korea said they traveled about 350 kilometers (220 miles) in distance and had an altitude of about 50 km, traveling at five times the speed of sound.

Kim has ignored US calls to get back to stalled nuclear disarmament talks and fired off ballistic missiles in defiance of United Nations Security Council resolutions. The US, South Korea and Japan have all said North Korea may be readying to conduct its first nuclear test since 2017.

“If Kim is looking to conduct the long-anticipated nuclear test, conditioning the region to provocations with the short-range missile tests might be a way to set the tone for the region,” said Soo Kim, a policy analyst with the Rand Corp. who previously worked at the Central Intelligence Agency.

North Korea has a habit of timing its provocations to political events. The latest launch also took place as the USS Ronald Reagan arrived in South Korea for joint drills and about a month after the US and South Korea held the Ulchi Freedom Shield -- their biggest joint military exercise in about five years. North Korea has bristled for decades at the joint military exercises, calling them a prelude to an invasion.

In addition to North Korea, the Biden administration is facing an emboldened China that Biden aides worry is taking provocative actions in the Taiwan Strait.

The vice president’s office quietly planned the DMZ visit over the past two weeks, according to a senior administration official, once it became clear Harris would travel to the region to attend the state funeral of former Japanese Prime Minister Shinzo Abe. But South Korean Prime Minister Han Duck-soo upstaged her office by announcing her DMZ stop at the start of their bilateral meeting in Tokyo.

“Your visit to the DMZ and Seoul will be very symbolic demonstrations of your strong commitment to the security and peace to the Korean Peninsula,” Han said to Harris on Tuesday.

A White House official then quickly confirmed the DMZ stop, raising the stakes for Harris’s already busy trip to the region.

While in the region, Harris met with Japanese Prime Minister Fumio Kishida and Australian Prime Minister Anthony Albanese, discussing Taiwan in both meetings, according to a senior administration official. She also led the US delegation to Abe’s state funeral, met with CEOs from the semiconductor industry to tout the recently passed CHIPS and Science Act, which is aimed at boosting competitiveness with China, and visited US troops stationed in Japan on the warship USS Howard.

(Updates with comment from analyst and details on missile flights.)