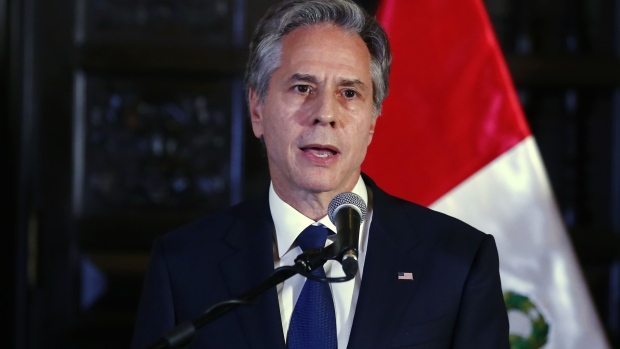 (Bloomberg) -- The US is willing to reconsider Venezuela sanctions only if President Nicolas Maduro takes “constructive steps” to restore democracy, Secretary of State Antony Blinken said Thursday, reiterating that he’s seen no such progress so far.

“There is no change in our sanctions policy,” Blinken told a press conference in the Peruvian capital of Lima. He said sanctions relief would require genuine progress in negotiations with the opposition and free and fair elections.

Blinken was responding to a question about news reports that the US was preparing to allow Chevron Corp. to resume pumping oil, smoothing the way for a possible reopening of US and European markets to oil exports from Venezuela.

Venezuela has been under economic and oil sanctions since 2019, after the US and dozens of other countries recognized opposition leader Juan Guaido as the country’s legitimate president.

“At the same time we will also review and, if necessary, recalibrate our approach if there’s even more repression by the regime,” Blinken said.

Over the weekend, the Biden administration said Venezuela had freed seven Americans, including oil executives and a former Marine, in a swap involving two members of Maduro’s family imprisoned in the US.