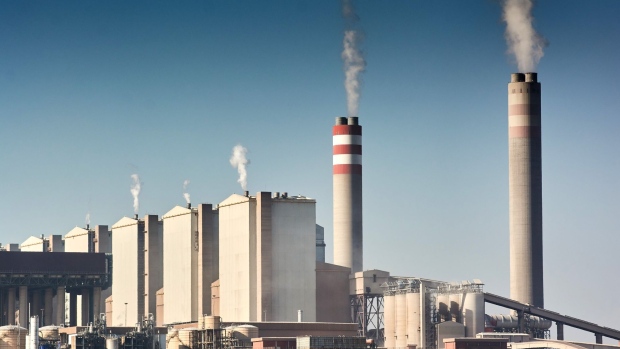 (Bloomberg) -- Debt guarantees along with loans with interest charges that are lower than what power utility Eskom Holdings SOC Ltd. currently pays may form part of a $8.5 billion climate finance deal offered to South Africa, a senior US Treasury official said.

The package will comprise a variety of financial instruments, and partner countries are confident additional nations, philanthropies and the private sector will pledge more financing, said the official, who asked not to be identified in line with US government policy. South Africa is in talks with the US, UK, Germany, France and the European Union to secure the funds to help transition away from coal, which is currently used to generate more than 80% of its power.

The aim of the agreement, announced at the COP26 climate talks in Glasgow in November, is to target national emissions toward the low end of South Africa’s so-called nationally determined contribution of emitting between 350 and 420 megatons of carbon dioxide annually by 2030. The country’s previous NDC, set in 2015, had an upper limit of 614 megatons by the end of the decade.

The official’s comments on Thursday reinforce statements made by Alok Sharma, the president of the COP26 climate talks and a UK cabinet minister, earlier in the week. Other parties have expressed interest in joining the pact and the aim was to make an announcement on concrete progress in talks by November, when COP27 takes place in Egypt, Sharma said.

South Africa’s deal is expected to serve as a prototype for other coal-dependent developing countries that may secure similar funding concessions, the parties negotiating the agreement have said.

Still, the US official raised concerns about South Africa’s plans to pursue the construction of new coal-fired power plants even as two new stations, which have a combined generation capacity of 9,600 megawatts and an estimated lifespan of half a century, are in the process of starting up.

South Africa plans to decommission about a quarter of its coal-fired generation over the next decade as aging plants come to the end of their lives.

Even so, no “red lines” have been set and no specific sources of energy have been excluded from talks, the official said. The next version of the country’s Integrated Resource Plan -- a blueprint for the nation’s energy mix – will take into account its climate goals. Any new coal capacity would make it more difficult for South Africa to meet its ambitious goals in lowering emissions, the official said.

Partner countries are confident in securing the initial amount of money pledged at COP26, the official said.

Still, the $8.5 billion is a fraction of what South Africa requires to switch from coal, which has powered its industrialization for decades. The country, which is the world’s 13th-biggest greenhouse gas emitter, needs to spend $250 billion over the next three decades to fund the closing down of coal-fired power plants and development of replacement green energy such as wind and solar, according to a study released last month.