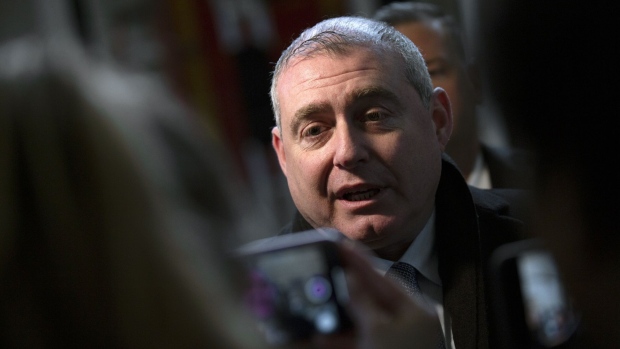 Lev Parnas, an associate of U.S. President Donald Trump's personal lawyer Rudy Giuliani, speaks to members of the media at Union Station in Washington D.C., U.S., on Wednesday, Jan. 29, 2020. Parnas asked a judge yesterday for permission to travel to Washington today to attend the president's trial. Parnas is out on bail facing charges of laundering foreign funds for U.S. political campaigns and masking the source of political contributions. , Bloomberg

(Bloomberg) -- US prosecutors say Lev Parnas, a Florida businessman and associate of Rudy Giuliani, should spend as long as eight years in prison for crimes that included violating campaign finance laws and defrauding investors.

The native of Ukraine vaulted to prominence during the first impeachment of former President Donald Trump when it was revealed that Giuliani had recruited him to help in his effort to dig up dirt on then-candidate Joe Biden and his son, Hunter.

Parnas’ criminal prosecution revolved around illegal efforts to pump money into U.S. elections, including making a straw donation for $325,000 to a committee that supported Trump, and defrauding investors of more than $2 million to support a lavish lifestyle.

After a Manhattan jury trial, he was also convicted of funneling funds from a Russian investor to political candidates in Nevada, Florida and elsewhere to build support for a planned cannabis business.

In a court filing late Wednesday, prosecutors urged a judge to refuse Parnas’ request for leniency and to ignore his efforts to shift blame to his “famous friends and compatriots.”

“Put simply, Parnas was engaged in a wire fraud scheme long before he traveled the world with rich and famous people,” they wrote.

In addition to spending 78 to 97 months behind bars, Parnas should pay $2,322,500 in restitution to his victims, the government said in its memo.

Parnas associate Igor Fruman pleaded guilty last year to one count of soliciting foreign campaign contributions and was sentenced to a year in prison.

The case is US v. Parnas, 19-cr-725, US District Court, Southern District of New York (Manhattan).