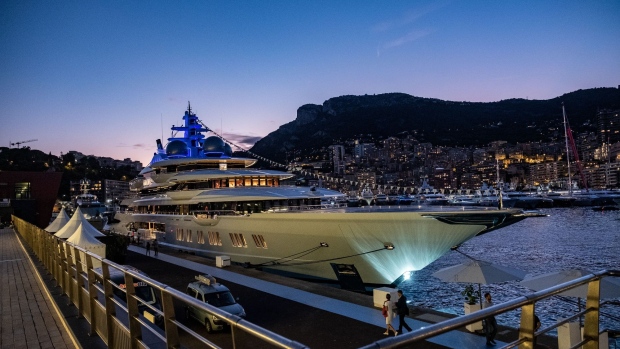 The luxury superyacht Amadea, manufactured by Luerssen Verwaltungs GmbH, sits moored in the harbor at night ahead of the Monaco Yacht Show (MYS) in Port Hercules, Monaco, on Tuesday, Sept. 24, 2019. The MYS features 125 luxury superyachts and runs from Sept. 25 - 28. , Bloomberg

(Bloomberg) -- A US bid to seize a $325 million superyacht it says belongs to sanctioned Russian billionaire Suleiman Kerimov has been delayed by a Fijian court, extending a legal battle that’s likely to be repeated around the world as governments move to claim oligarchs’ assets.

Fiji’s Supreme Court granted Millemarin Investments Ltd., the registered owner of the 348-foot Amadea, a temporary stay on a previous ruling that would have allowed the US to seize the vessel this week, according to the Office of the Director of Public Prosecutions in the Pacific island nation, which is assisting US efforts to apprehend the ship.

After losing an initial appeal last week to overturn the seizure, Millemarin lodged a second appeal. The Supreme Court is expected to decide on the appeal on June 7, when the stay will expire, the prosecutions office said. The stay prevents the yacht from leaving Fiji’s waters, where it’s been since mid-April.

At the heart of the fight over the ship is its ownership. Documents filed by Millemarin as part of the appeal seen by Bloomberg News contest whether Fiji’s courts have the legal right to hand the Amadea over to the US. They claim the vessel is owned by another tycoon, Eduard Khudainatov, the former chairman and chief executive officer of Russian oil and gas giant Rosneft Oil Co. Khudainatov doesn’t appear to be on any sanctions lists.

The US contends that Khudainatov “is being used as a clean, unsanctioned owner” to conceal the Amadea’s true owner: Kerimov, a Russian gold billionaire who was first sanctioned by Washington in 2018, Bloomberg reported last month.

The showdown in Fiji is a glimpse of the sort of courtroom tussles that may unfold as countries including the US, Spain and Germany go after the megayachts, villas and planes of Russian tycoons who have been put on sanctions lists for their close connections to President Vladimir Putin. Already more than a dozen yachts worth over $2.25 billion have been seized as part of the push, ignited by Russia’s invasion of Ukraine.

The legal fights are likely to be lengthy, said Benjamin Maltby, a partner at London-based Keystone Law, which specializes in superyacht law.

“These yachts are a source of pride and prestige for the owners,” he said. “There’s absolutely no way they would give it away or walk away willingly.”

The US says layers of offshore shell companies were created to conceal that Kerimov is the beneficial owner, with crew members giving codes names for the sanctioned billionaire and his family members, according to a US affidavit earlier reported by Bloomberg. Kerimov, a member of Russia’s upper house of parliament, was also sanctioned by the UK and European Union in March for his close ties to Putin.

The Amadea, which features a helipad and mosaic-tiled pool, arrived in the Fijian port of Lautoka on April 12 after an 18-day journey from Mexico, data compiled by Bloomberg show. Fiji detained the superyacht on April 19 after it received a formal request for mutual legal assistance from the US government, according to the public prosecutions office.

On May 3, Fiji’s High Court gave the green light for US and local authorities to seize the vessel. The US has devoted considerable resources to seize the yacht, sending officials to Fiji from the Marshals Service, FBI and Coast Guard, according to court filings.

On May 27, US officials boarded the Amadea and ordered the British captain and the vessel’s crew to disembark, replacing them with 24 new crew members, according to a filing from John Walsh, the ship’s former captain. US officials, with the help of the new crew, were preparing “to sail the Amadea out of Fiji waters,” Walsh said in the affidavit.

In the court filings, Haniff argued that under Fiji’s laws, local authorities can legally detain or restrain the vessel but can’t hand it over to another foreign country.

If the seizure is successful, the Amadea will be among more than a dozen multimillion dollar Russian tycoon-linked megayachts rounded up by Western governments.

Kerimov is worth about $13.5 billion, according to the Bloomberg Billionaires Index. His family formerly held nearly half of Polyus, the biggest gold producer in Russia. French prosecutors had accused him of laundering money obtained via tax fraud in deals to buy four villas on the Côte d’Azur worth hundreds of millions of euros. He beat money-laundering charges in France in 2018.

Want to interact with a tracker of yachts tied to sanctioned Russians? You can here.

The actions by the US and its allies have scattered Russian yachts to locales perceived as less likely to seize them, including parts of the Middle East, Turkey and the Caribbean, according to space-based analytics and data firm Spire Global Inc. Megayachts owned by Russians account for as much as 10% of the global fleet, according to industry watcher The Superyacht Group.