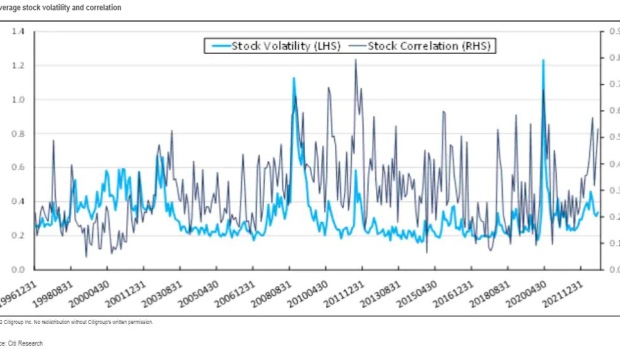 (Bloomberg) -- US stocks just posted a rare streak of quarterly declines and are in a bear market, but Citigroup Inc. quantitative strategists say they’re only just starting to reflect the risks of a recession.

A team led by Hong Li said equity markets had “turned decidedly defensive” and that they could come under further pressure as they continue to be “heavily driven” by heightened bond market volatility as well as concerns around persistent inflation and a staunchly hawkish Federal Reserve.

“We are still in the early stage of positioning for recession” and there’s “more downside risk for the market and the earnings season,” Hong wrote in a note dated Oct. 4.

The bearish view echoes similar calls from other investment banks including Goldman Sachs Group Inc. and Bank of America Corp., who are concerned that the S&P 500 has yet to bottom out even as it posted three straight quarters of declines -- its first such streak since the global financial crisis.

Stocks have rallied in the first days of October, partly on bets that recent weakness in economic data could prompt the Fed to tone down its hawkish policy, but a slate of strategists has warned it’s too soon to expect the central bank to shift gears. US index futures were down about 0.8% on Wednesday after the biggest two-day gain for the S&P 500 since April 2020.

Barclays Plc strategist Emmanuel Cau agrees that the risk to earnings estimates is elevated. “Equity valuations have normalized on surging real rates, but earnings reset still lies ahead,” he wrote in a note on Wednesday. “Consensus estimates of high single-digit EPS growth and margins expansion in 2023 look way too high.”

(Updates with US futures and Barclays comments from fifth paragraph.)