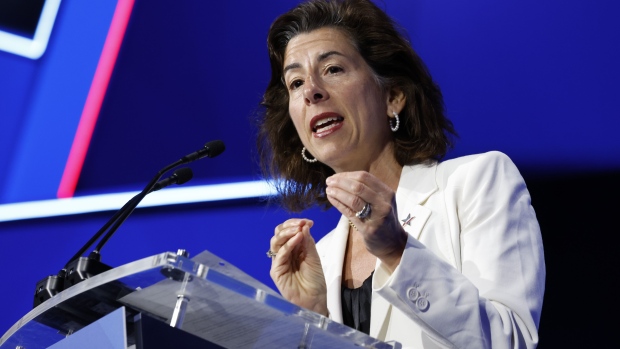 (Bloomberg) -- US allies and companies support Washington’s efforts to keep China bereft of advanced technologies needed to modernize its military, and they’re willing to accept lower revenue for the sake of national security, according to US Commerce Secretary Gina Raimondo.

Raimondo, previewing remarks she plans to give at the Massachusetts Institute of Technology on Wednesday about competing with China, pushed back against criticism from companies in the US, as well as from allies with key technology firms in the Netherlands and Japan, that US policies to restrict exports and expertise to China damage their bottom lines.

The chief executives of US and foreign firms “share the concern as it relates to the national security threat,” she said. “Are they happy about losing revenue? Probably not. But do they fully intend to comply, because they know it’s in the security interest? I think so.”

Raimondo’s Commerce Department is at the forefront of the White House efforts to limit China’s access to advanced technologies, particularly those that have military or surveillance capabilities. At the same time, the department is spearheading efforts to boost domestic development and output of next-generation semiconductors, most notably through distribution of more than $50 billion in investment incentives authorized through the Chips and Science Act signed into law earlier this year.

“Semiconductors are ground zero in this technological competition and core to our investment strategy,” she said. “We have to ensure the US builds the talent, technologies and manufacturing capacity necessary to be at the forefront of innovation and lead the global economy.”

The Biden administration has been trying to persuade the Netherlands and Japan to follow suit and impose the same or similar restrictions on its chip equipment manufacturers, but progress stalled after the US went ahead with its curbs. US officials are traveling to The Hague to continue negotiations and are confident they can reach an agreement, even if it takes a few more months.

Raimondo told companies earlier this month that it would take another six to nine months before she could get allies on board, leading American firms to complain about their decreasing market share while Dutch and Japanese competitors are able to keep supplying China.

“I’m confident that our like-minded partners -- by the way, who have the same national security interests -- will ultimately determine to act in concert with us in a way that enhances our shared national security,” she said. “I’m really quite confident, based upon our consultations with these countries, that they will come to a similar conclusion that we did.”

Raimondo intends to highlight in her speech -- titled “US Competitiveness and the China Challenge” -- the key points of the US policy, including “transformational” investments in innovation and manufacturing; bolstering efforts to prevent Beijing from undermining national security, including more strategic use of US export controls; and how the US can partner with allies.

She also plans to advocate for the advantages of US trade and investment, including the exchange of “benign” technologies and goods with China.

“We’re not seeking the decoupling from China,” Raimondo said. “We want to promote trade and investment in areas that don’t threaten our core economic and national security interests, or compromise human rights values.”