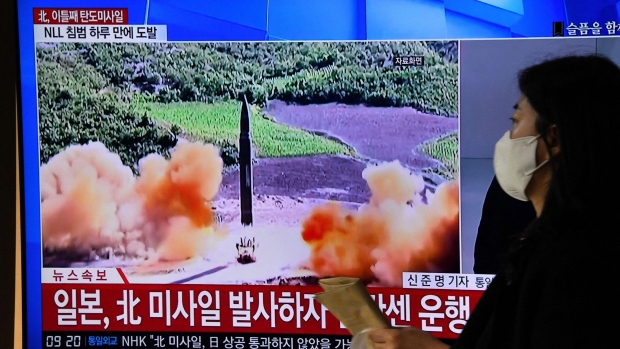 (Bloomberg) -- The Biden administration is considering “all available tools” to punish North Korea over an unprecedented series of missile tests, an official said, a day after the US, Japan and South Korea revealed a new round of sanctions to pressure Pyongyang to come back to the negotiating table.

The coordinated action represents the renewed strength of the US-Japan-South Korea alliance, White House National Security Council spokeswoman Adrienne Watson said in a statement Friday, saying that an “increasingly desperate” North Korea was turning to “virtual currency heists and other cyberthefts” to fund its weapons program.

“As we have made clear, the door has not closed on diplomacy, but Pyongyang must cease its destabilizing actions and engage diplomatically,” she said.

On Thursday, the US announced measures against three individuals for their connection to the ruling Workers’ Party of Korea, while Japan targeted three groups and one individual. South Korea added eight individuals and seven institutions it said were connected to North Korea’s missile and nuclear weapons development program.

The allies are grappling for new ways to ramp up pressure against North Korea, which is already under comprehensive US and United Nations sanctions. The existing sanctions regime includes a cap on fuel imports and limits on foreign income, but analysts say western sanctions have been largely ineffective at halting North Korea’s weapons program.

Russia and China, two longtime partners of North Korea, have veto power at the UN Security Council and have shown no intent to punish leader Kim Jong Un with extra sanctions. They played a critical role in passing such measures five years ago after Kim’s last nuclear test.

North Korea has fired off a record number of missiles this year as the US and its allies are focused on Russia’s invasion of Ukraine. In November, North Korea test-fired a suspected intercontinental ballistic missile with an estimated range far enough to carry a warhead to the American mainland, highlighting the challenge for President Joe Biden.

The US, South Korea and Japan have promised a coordinated response if Kim defies United Nations resolutions and detonates a nuclear device.

Among the organizations added to Japan’s sanctions list was Lazarus Group, which the government said also goes under aliases including the New Romantic Cyber Army Team. North Korea has intensified its cybercrime operations in recent years, including stealing from cryptocurrency platforms, to generate revenue to prop up its ailing economy.

A report from blockchain research firm Chainalysis said North Korea’s hacker army stole $400 million in crypto assets in 2021. In April of this year, the US Treasury Department tied the North Korean hacking group Lazarus to the theft of more than $600 million in crypto from a software bridge used by a popular video game.

The US previously sanctioned a “virtual currency mixer,” Blender.io, that the government said was tied to North Korean hacking and money-laundering activities.

The US could still target North Korean shipping companies, coal exports to China and Chinese companies employing overseas North Korean laborers, as well as North Korean efforts to steal cryptocurrency, said Anthony Ruggiero, a former North Korea director on the White House National Security Council who is now at the Foundation for Defense of Democracies.

“There’s a lot left to sanction,” Ruggiero said, speaking Thursday at an event on threats to nonproliferation. “We’ve got to reinvigorate the pressure campaign.”

National Security Council Advisor Jake Sullivan told a Center for Strategic and International Studies forum on Wednesday that new sanctions were “coming forward” and that the US would bolster military and intelligence cooperation with Japan and South Korea.

Tighter military cooperation will include upgrading “the alliance software that we have in the region,” and “steps with respect to the hardware,” Sullivan said, without providing further details.