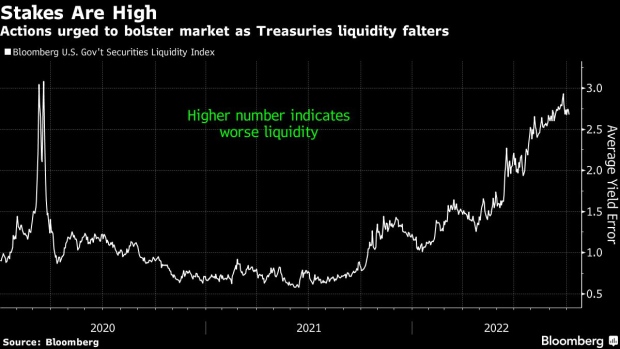 The U.S. Treasury building in Washington, D.C., U.S., on Sunday, April 10, 2022. The Treasury secretary is counting on the support of corporate America for a recently agreed global tax deal to help win passage in the U.S. Congress, a crucial step for its worldwide success. Photographer: Tom Brenner/Bloomberg , Bloomberg

(Bloomberg) -- The latest bout of global financial volatility has heightened concerns about regulators’ continuing failure to resolve liquidity problems with US Treasuries -- the debt that serves as a benchmark for the world.

It’s getting harder and harder to buy and sell Treasuries in large quantities without those trades moving the market. Market depth, as the measure is known, last Thursday hit the worst level since the throes of the Covid-19 crisis in the spring of 2020, when the Federal Reserve was forced into massive intervention.

With rising risks of a global recession, escalating geopolitical tensions and the potential for further defaults by developing nations -- not to mention ructions in a developed economy such as the UK -- investors may not be able to rely on Treasuries as the reliable haven they once were.

“We have seen an appreciable and troubling deterioration in Treasury market liquidity,” said Krishna Guha, head of central bank strategy at Evercore ISI. Regulators “really haven’t delivered yet any substantial reforms,” he said. “What we are seeing at the moment is a reminder that the work is really important.”

When the Treasuries market broke down amid a panicked rush into dollar cash in March 2020, the Fed swooped in as buyer of last resort. And while it now has a backstop facility allowing the exchange of Treasuries for cash, volatility, if extreme enough, could still force the Fed into action, observers said.

That’s particularly awkward now, when policymakers are not only raising interest rates but actively shrinking the portfolio of Treasuries. So-called quantitative tightening is supposed to be playing an “important role” in tightening monetary policy, as part of the central bank’s battle to contain inflation.

“The biggest nightmare for the Fed now is that they have to step in and buy debt,” said Priya Misra, global head of rates strategy at TD Securities. “If the Fed has to step in -- when it’s in conflict to monetary policy -- it really puts them in a bind,” she said. “That’s why I think regulators need to fix the market structure.”

The Treasury Department is working on an initiative to enhance transparency in the trading of US government debt, seen as one step that could encourage dealers and investors to boost volumes. News on that front may come at a Nov. 16 annual market-structure conference.

But the outlook for bigger reforms, such as the Fed relaxing banks’ capital requirements connecting to how much Treasuries they hold, remains unclear. An independent panel this past summer criticized regulators for the slow pace of their efforts.

“I do think the official sector is moving, but there’s a lot more to do,” said Darrell Duffie, a Stanford University finance professor who served on that panel.

Duffie, who is currently seconded to the Federal Reserve Bank of New York, added, “The Treasury market is the most important securities market in the world and it’s the lifeblood of our national economic security. You can’t just say ‘we hope it will get better’ you have to move to make it better.”

For now, things are not better, with what would once be viewed as outsized daily yield swings becoming commonplace. A Bloomberg index of liquidity levels, which measures on average how far yields are away from where fair-value models say they should be, shows conditions have deteriorated.

Just on Thursday, Treasuries extended losses in the wake of a large sale of futures contracts. Prices had been falling, sending yields higher, in the wake of hawkish comments from Minneapolis Fed President Neel Kashkari.

Fundamental to the structural challenge is the surge in supply -- Treasury debt outstanding has climbed by $7 trillion since the end of 2019. And big financial institutions haven’t been as willing to serve as market-makers, burdened by the so-called supplementary leverage ratio, or SLR, which requires that capital be put against such activity (as well as reserve holdings).

Fed Governor Michelle Bowman encouraged some observers with remarks this week signaling openness to adjusting the SLR. But Bowman’s not in the key role overseeing such a move, which would fall to Michael Barr, the newly installed vice chair for supervision.

“But for Treasuries to serve the purpose for which they have been anointed -- which is a cash substitute -- the intermediation mechanism” needs to be more robust, Younger said. “It’s still important to fix the system” so that it can handle a March 2020 type of strain, he said.

Among the other moves regulators are looking at is enhancing the role of central clearing of Treasuries, for which the Securities and Exchange Commission has put forth a proposal. For its part, Pacific Investment Management Co. wants investors to be able to trade directly with each other.

“The individual initiatives being discussed may not be silver bullets on their own, but collectively they would contribute to a more efficient, resilient and liquid market,” said Stephen Berger, global head of government and regulatory policy at Citadel Securities. “Delaying unnecessarily the implementation of the market enhancements being discussed perpetuates the risk that the Fed feels compelled to intervene during a future market dislocation.”