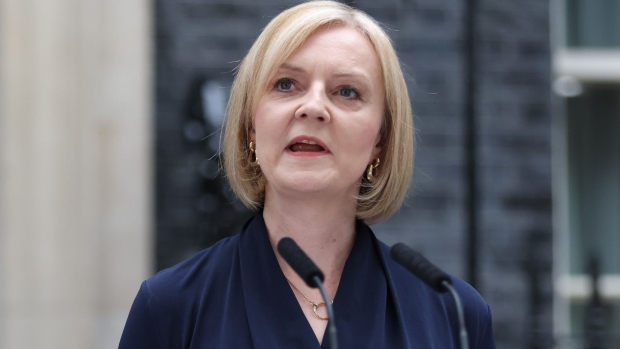 (Bloomberg) -- The Biden administration is alarmed over the market turmoil triggered by the new UK government’s economic program and is seeking ways to encourage Prime Minister Liz Truss’s team to dial back its dramatic tax cuts.

Officials inside the US Treasury Department are concerned at the volatility in financial markets and potential spillovers to the broader economy, and are working through the IMF to apply pressure on Truss’s government, according to people familiar with the matter.

The International Monetary Fund late Tuesday called on the UK to “re-evaluate the tax measures” unveiled last week that prompted historic plunges in British government bonds and the pound. The US is the Washington-based IMF’s largest shareholder.

“The policy of cutting taxes and simultaneously increasing spending isn’t one that’s going to fight inflation in the short term or put you in good stead for longer-term economic growth,” Raimondo said Wednesday during an event in Washington.

“Investors, businesspeople want to see world leaders taking inflation very seriously -- and it’s hard to see that at this point” in the UK approach, Raimondo said.

A US official, when reached for comment said, that the White House and Treasury are always in touch with allies and partners, including the UK, on the global economy.

President Joe Biden on Wednesday gathered with his economic team for an update, and directed them to stay in frequent touch with partners, allies and key market actors, and to brief him regularly as conditions evolve.

UK government bonds, known as gilts, rebounded along with the pound on Wednesday after the Bank of England pledged to make unlimited purchases of long-dated gilts. That was after a massive surge in yields to the highest levels in two decades left London facing an imminent crash in the gilt market.

The plunge in UK assets earlier this week contributed to declines in US Treasuries and other government securities as well, and to further appreciation in the dollar.

“We haven’t seen liquidity problems develop in markets -- we’re not seeing, to the best of my knowledge, the kind of deleveraging that could signify some financial stability risks,” she said.

The British-American relationship, often labeled as special given the historic and cultural ties between the two nations, has been more strained of late. Biden was no fan of Brexit, which Truss came around to support. But he has little too gain from overtly criticizing an important ally from a major Group of Seven economy, and one that’s supported his stance on Ukraine.

But when it comes economics and ideology, Biden the Democrat and Truss the Thatcherite Conservative could not be more different.

Back in the UK, some observers took that tweet to be a critique of “Trussonomics,” a version of that very policy Biden poured scorn over -- the idea that cutting taxes for top earners will eventually boost growth.