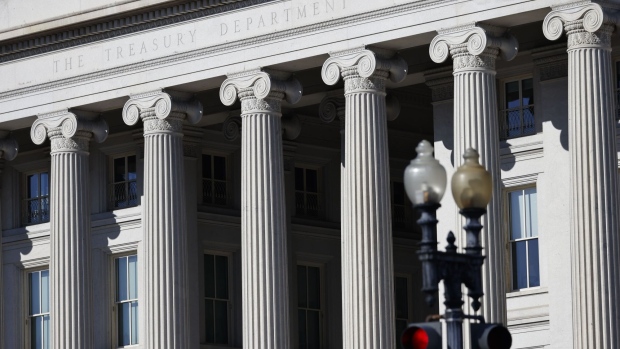 The US Treasury building in Washington, DC, US, on Friday, Dec. 30, 2022. The Federal Reserve's preferred inflation measures eased in November while consumer spending stagnated, suggesting the central bank's interest-rate hikes are helping to cool both price pressures and broader demand, with more tightening on the way. Photographer: Ting Shen/Bloomberg , Bloomberg

(Bloomberg) -- The US Treasury Department refused Wednesday to provide House Republicans any suspicious activity reports it may have on foreign banking and other business transactions by Hunter Biden and other members of President Joe Biden’s family.

Jonathan Davidson, Treasury’s legislative affairs chief, told House Oversight and Accountability Chairman James Comer in a letter that he needs more details about why the panel is seeking such “highly sensitive” information.

Comer wrote on Jan. 11 to Treasury Secretary Janet Yellen for any so-called suspicious activity reports — used by banks to flag what they deem dubiously large transactions — as part of his panel’s probes into overseas business and other dealings by the president’s son.

Without acknowledging whether such reports on the Bidens exist, Davidson on Wednesday instructed Comer that “improper disclosure” of such information can undermine the executive branch’s “conduct of law enforcement, intelligence, and national security activities.”

Comer responded that “this coordinated effort by the Biden Administration to hide information about President Biden and his family’s shady business schemes is alarming and raises many questions.”

In his letter to Yellen, Comer wrote, “The Committee is investigating President Biden’s knowledge of and role in these schemes to assess whether he has compromised our national security at the expense of the American people.”

Comer added the committee also “will examine drafting legislation to strengthen federal ethics laws regarding employees and their families.”

After receiving Davidson’s letter from Treasury, Comer said the panel will continue to request the reports and will use “the power of the gavel to get them if needed.”

The investigation of Biden family business dealings is just one of the inquiries that Republicans plan over the next two years. Biden’s advisers are counting on federal agency staff, congressional Democrats and a revived outside group to help counter GOP-led probes.

The president’s son, who has publicly battled drug addiction, has been a particular target for Republicans looking to undermine Biden’s reputation for high ethical standards. They claim that Biden played a role in and maybe profited from Hunter Biden’s business dealings in Ukraine and China.

Comer and other Republicans already said they have evidence that finances, credit cards, and bank accounts of Hunter and Joe Biden were commingled if not shared.

And in an interim report released in November, Republicans surmised that the Treasury Department has at least 150 SARs related to financial transactions of Biden family members.