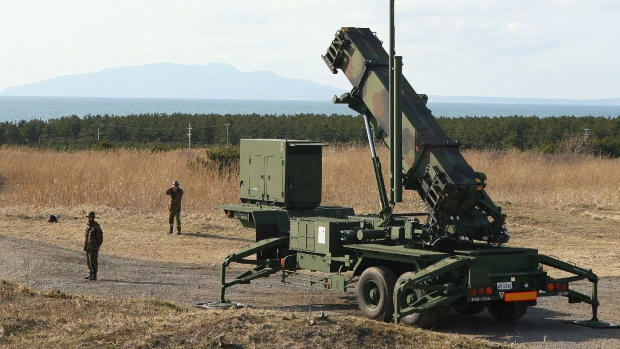 (Bloomberg) -- The US has proposed selling Taiwan as many as 100 of its most advanced Patriot air-defense missiles along with radar and support equipment in a deal valued at $882 million, according to a State Department notice obtained by Bloomberg News.

The proposal was made under the provisions of a 2010 sale to the island and so technically is not new. It is classified as an enhancement to the earlier deal, with a potential total value of $2.81 billion. The upgrade won’t change the overall value of that deal, which infuriated Beijing at the time and led it to halt planned military exchanges with the U.S.

The State Department didn’t immediately respond to a request for comment. The department’s notice to lawmakers is expected to be printed in the Congressional Record as soon as Tuesday and will be reviewed by Congress for up to 30 days.

The new proposal calls for as many as 100 of Lockheed Martin Corp.’s hit-to-kill Patriot Pac-3 “Missile Segment Enhancement” missiles that are more advanced than earlier Patriots sent to Taiwan. The proposal also calls for M903 Launcher modification kits, missile round trainers and software upgrades to accommodate the new missiles.

The move will only add to tensions between the US and China that have spiraled in recent months amid Biden administration concerns that Beijing is becoming more aggressive toward the island, which it claims as its territory. The US says China wants to have the capability to invade by 2027.

The proposed sale will enhance Taiwan’s Patriot missile system “to improve its missile defense capability, defend its territorial integrity, and deter threats for regional stability,” the department said in the notice.

The total estimated 2010 value will remain $2.81 billion, State said. The Patriot MSE is a “small, highly agile, kinetic kill interceptor for defense against tactical ballistic missiles, cruise missiles and air-breathing threats” and “represents the next generation in hit-to-kill interceptors and provides expanded battlespace against evolving threats.”

Taiwan and the US keep in close contact on security issues, Xavier Chang, spokesman for the Presidential Office in Taipei, said in a text message, adding that the two sides will “will disclose information in a timely manner.”

--With assistance from Cindy Wang and Philip Glamann.