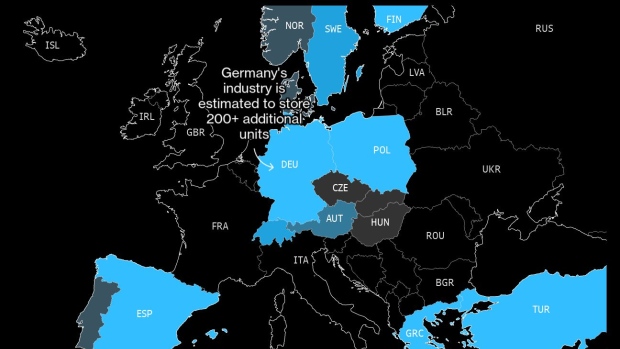 (Bloomberg) -- The US will send Ukraine 31 of its M1 Abrams battle tanks, adding to a German commitment to supply some of its top-line armor and infusing the country with a major new capability as it looks to pry Russian forces from the east.

The tanks will help Ukraine achieve its changing strategic objectives, President Joe Biden saidt Wednesday, adding that delivery of the vehicles would take time — though he didn’t say how much. The first batch of 14 Leopard 2 A6 tanks, which will come from existing German stocks, could arrive in Ukraine within three months, part of a broader European promise for 100 tanks.

“The expectation on the part of Russia is we’re going to break up, we’re not going to stay united,” Biden said. “But we are fully, thoroughly, totally united.”

The decision by the US and Germany follows a broader trend of allied nations giving Ukraine increasingly powerful weapons to counter Russia. It also marked a major reversal after weeks of tense back-and-forth discussions that threatened to strain the united front that’s been a hallmark of NATO’s strategy against President Vladimir Putin.

The US had come under heavy pressure from President Volodymyr Zelenskiy to supply its most sophisticated battle tank, but had rebuffed those demands, arguing that the Abrams was ill-suited for Ukraine because it requires jet fuel and extensive training, as well as massive logistical support. But Germany had balked at sending its own battle tank unless the US and allies did the same.

Wednesday’s move also underscored just how much allied thinking has changed since the start of the war, when officials worried Zelenskiy’s forces would be overrun within days and sought to balance a desire to help against fears of escalation that could lead to a bigger war.

But 11 months later, as fears of a full blown NATO conflict with Russia have eased, allies have provided anti-aircraft systems, armored vehicles, drones and other supplies they wouldn’t have dreamed of sending months ago. The focus has shifted to ousting Russian forces from the Ukrainian territory they took in the early days of the invasion.

“We are talking here about very effective weapons systems,” German Chancellor Olaf Scholz said in a statement to the lower house of parliament Wednesday. He also defended his policy of not acting alone. “It was right and it is right that we did not allow ourselves to be pushed but chose, and will continue to choose, this close cooperation,” he said.

The US tanks, built by General Dynamics Corp., will be provided under the Ukraine Security Assistance Initiative, under which the US procures weapons for the country rather than drawing from existing stocks, the US officials said. They wouldn’t say which Abrams version would be provided, or if they would be new or refurbished. The US will also provide eight M88 tank recovery vehicles.

The officials told reporters that training to operate and maintain the tanks would start immediately, while declining to provide specifics on where the training would take place. Asked why the US had changed course after insisting for months that they weren’t the right fit, the officials stressed that Biden’s priority was maintaining allied unity.

“Germany didn’t force me to change my mind,” Biden said. “We wanted to make sure we were all together. That’s what we were going to do all along, and that’s what we’re doing now.”

The announcements Wednesday on both sides of the Atlantic followed intense consultations on the highest levels over the past weeks, including multiple phone calls between Biden and Scholz, as well as between their national security teams.

Britain had earlier committed to send its main battle tank, the Challenger. France is leaving open the possibility of sending its Leclerc tanks, but for now the focus is on sending artillery, air defense, light armor, a senior French official told reporters on Wednesday.

Other nations were also set to send tanks now that Germany has indicated it will grant permission to deliver their own Leopard 2’s to Ukraine. Poland on Tuesday formally requested German authorization to ship Ukraine 14 of its tanks. And Finland’s Foreign Minister Pekka Haavisto reiterated his country is ready to take part in the shipment of Leopard tanks “in one or another way.”

Germany’s decision to ship the Leopards is the latest step in a radical overhaul of its own defense policy triggered by Russia’s full-scale invasion. Until then, Germany refused to send weapons to conflict zones and had allowed its armed forces to deteriorate during decades of underinvestment.

Ukraine has long been pleading for heavy battle tanks amid expectations that fighting will intensify after the winter. While Scholz’s government is one of the biggest providers of military and financial assistance to Kyiv, the German leader has been criticized for appearing to drag his feet over the decision to send the Leopards or allow allies to do so.

Kremlin spokesman Dmitry Peskov said Wednesday that Ukraine’s allies were overestimating the potential of the battle tanks to influence the war, calling it a “deep delusion.”

Any Abrams and Leopard tanks supplied to Ukraine will “burn just like all the others,” Peskov told reporters on a conference call, the Tass news service reported.

--With assistance from Courtney McBride and Jennifer Jacobs.