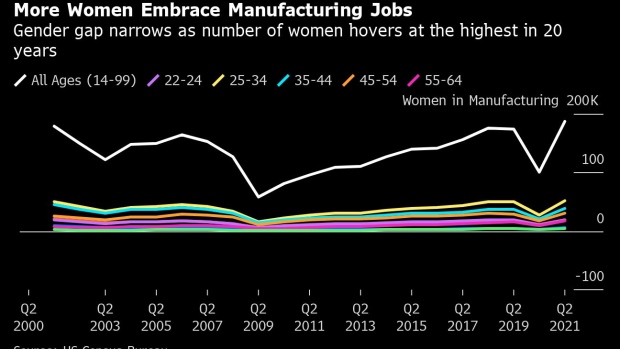 A worker on the Ford F-150 Lightning production line at the Ford Motor Co. Rouge Electric Vehicle Center (REVC) in Dearborn, Michigan, US, on Thursday, Sept. 8, 2022. Treasury Secretary Yellen outlined some of the Biden administration's unfinished economic business in a speech today calling for higher tax rates on the rich and on companies to help pay for social spending. Photographer: Emily Elconin/Bloomberg , Bloomberg

(Bloomberg) -- The number of US women working in manufacturing is rising again after a drop during the first year of the Covid-19 pandemic, and more will likely join the male-dominated field thanks to a shift toward automation.

Women are now returning at levels seen before 2020, after some age groups including those age 55 to 64 saw spikes last year, according to a post from the US Census Bureau.

New jobs requiring high-tech skills and efforts to encourage girls to study engineering and related subjects help chip away at the gender gap, the agency said.

The increasing representation of women can help boost US manufacturing, which lost 5 million workers from 2000 to 2015, according to Census data, as employers moved the jobs overseas.

The number of women in manufacturing totals 186,985 as of the second quarter last year, the highest in at least 20 years, although men still hold about 68% of US manufacturing jobs.