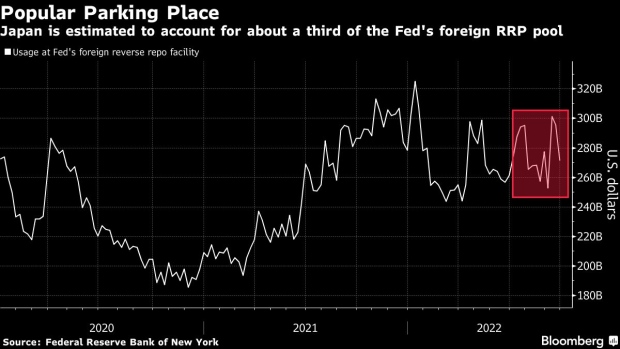 (Bloomberg) -- Usage of a key Federal Reserve facility for foreign central banks declined, just one week after the Japanese government intervened to prop up the yen for the first time since 1998.

Foreign central banks stashed $271 billion at the Fed’s reverse repurchase agreement facility, according to the data for the period through Sept. 28, down from $295 billion a week earlier. Balances dropped by about $6 billion in the prior week as well.

The Fed’s creation of a reverse repo facility that’s accessible by foreign central banks means that international monetary authorities such as the Bank of Japan can keep a big chunk of their cash there earning interest instead of in Treasury bills and other securities. And when they need to do something with those dollars, they can just withdraw funds from the facility without ruffling markets.

As with the domestic reverse repo facility, the so-called foreign RRP is a place where counterparties can stick their cash overnight with the US monetary authority. And that cash earns a rate that’s generally equivalent to the offering yield on the New York Fed’s domestic facility, making it a more than palatable alternative to a lot of market-based short-end instruments.

“It’s very possible that the drop was used by the BOJ in conjunction with last week’s $6bn decline to help finance their yen intervention,” said TD Securities strategist Gennadiy Goldberg. “The latest data we have shows the BOJ holding about $135bn of foreign RRP balances, which we suspect is largely with the Fed so if that’s the case, the BOJ has plenty more ammunition to intervene.”

Japanese government likely sold about $25 billion on Sept. 22 to support its currency, according to estimates by Bank of America strategists. Japan may be able to execute about four to 10 similar interventions by selling liquid assets -- four times if only selling deposits, and 10 times if selling deposits and securities shorter than one year in maturity, they said.