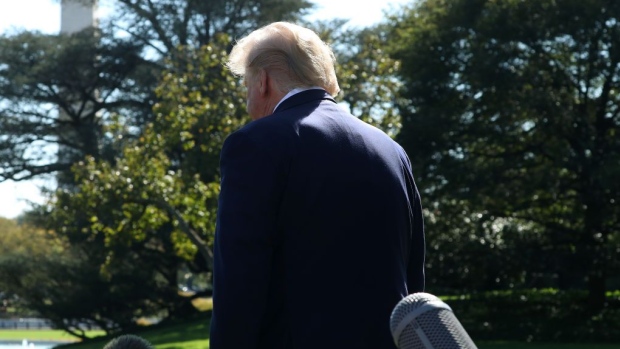 U.S. President Donald Trump walks away after speaking to the media while departing on Marine One for Pittsburgh to speak at the annual Shale Insight Conference, October 23, 2019, Washington, DC. Getty Images North America/Mark Wilson

U.S. companies and trade groups that want lawmakers to approve a new trade pact with Mexico and Canada are making the unusual bet that the impeachment drama in Washington could actually help get the deal through Congress.

Industry coalitions and smaller firms have increased their lobbying in recent weeks in a bid to get the U.S.-Mexico-Canada Trade Agreement ratified before the presidential race heats up early next year. Yet, while that timetable would put the USMCA squarely in the path of the intensifying impeachment probe of Donald Trump, deal supporters say they see that as a potential advantage.

They’re wagering that House Democrats led by Speaker Nancy Pelosi will want to show voters that the party can still do other business while investigating the president. That would blunt criticism from Trump and Republican allies who have faulted Pelosi and Democrats for focusing too much on impeachment.

“As we get deeper and deeper down the rabbit hole of impeachment, the speaker is going to have to demonstrate that the Democratic majority in the House can continue to move legislation — and this, I believe, is the lowest-hanging fruit,” said Phil Cox, co-chairman of Trade Works for America, a coalition of companies and organizations that represent farmers, ranchers, automakers and others.

It’s up to Pelosi to decide when the pact gets a vote. While she has said she wants to “get to yes,” she hasn’t committed to a timetable as a Democratic working group meets with the White House officials to amend provisions on the environment, labour rights, drug-patent protections and overall enforcement of the pact.

The trade groups say they think the renegotiated deal could win support from both political parties.

For Republicans, backing the trade pact is a chance to show support for Trump while delivering results for constituents, according to John Murphy, senior vice president for international policy at the U.S. Chamber of Commerce, which is leading the USMCA Coalition of associations and more than 500 firms including General Motors Co., Pfizer Inc., Microsoft Corp. and Walmart Inc.

Even though Democrats may be reluctant to hand the president a victory, many will be motivated to show voters they can make progress on kitchen-table issues, he said.

“Considering what a rambunctious time it is here in Washington, we’re optimistic that this will happen,” Murphy added. “The gaps have been narrowed very considerably, and a lot of the many different actors in this town have their own compelling reasons to move forward on this.”Murphy pointed out that meetings have intensified between U.S. Trade Representative Robert Lighthizer and the Democratic working group. He said he thinks the parties are potentially close with a “very serious objective” to get a handshake agreement before the House goes on recess from Friday until Nov. 12. Legislative text for a vote could follow shortly the lawmakers return, he said.

The USMCA would replace the North American Free Trade Agreement, which has been in place since 1994. The USMCA Coalition says that U.S. trade with Canada and Mexico supports 12 million American jobs and reached almost $1.3 trillion in 2017.

Murphy said the chamber has facilitated more visits by businesses and associations to Capitol Hill to meet with lawmakers about the USMCA than any other issue, including 14 of the so-called fly-ins since Labor Day alone. It broadcast television ads in Michigan and New Mexico last week to encourage voters to call their representatives to support the USMCA, with spots continuing elsewhere as part of a six-figure campaign. The group has targeted about 100 Democratic members for outreach, especially freshmen lawmakers.The bipartisan Trade Works for America is focusing on 45 congressional districts in 21 states with Democratic members where Trump won in 2016 or are very competitive, Cox said. The group is seeking to double the 300,000 contacts it’s made with voters within the next 45 days, urging them to call or write their representative to support USMCA.

Even smaller businesses are adding their voices. Two executives from North Carolina-based Kontoor Brands Inc., which produces Wrangler and Lee apparel, came to Washington last week to meet with about a dozen Democratic House members and staff to urge them to pass the USMCA before Thanksgiving.The company is telling lawmakers that jobs in their district would be at risk without a trade deal, because the company has 75 U.S. suppliers that employ about 75,000 workers, many of whom make zippers and other components for jeans produced at the company’s Mexican facilities. Scott Deitz, vice president for corporate relations, said Kontoor has also offered to help arrange meetings between the suppliers and their representatives.

“We’re not important enough of a company to boil the ocean, but what we can do is partner with our suppliers in a way where we might be able to punch above our weight a little bit,” Dietz said.

If Pelosi brings USMCA to the floor, there should be enough votes to pass it, said Joe Crowley, a former 10-term Democratic representative from New York who is honorary co-chairman of the Pass USMCA Coalition, a separate effort of business groups.

While some Democrats won’t vote for the pact under any circumstances, others are working to put their imprint on it by making changes -- something that hadn’t happened before this year, he said.

“Is this the greatest trade agreement since sliced bread? No, it’s not,” Crowley said. “But there’s no such thing as a perfect agreement.”

While Trump has been tweeting about “do nothing Democrats” and “Nervous Nancy Pelosi” taking too long to act on USMCA, other members of the administration have saying positive things about one of the president’s favorite nemeses.

There is “considerable positive momentum” for passage before the end of the year, in part because of how Pelosi has handled negotiations, Trump economic adviser Larry Kudlow said during an Oct. 22 speech at an infrastructure forum in Washington.

“I know that President Trump has his political differences with Speaker Pelosi,” Kudlow said. “But I will also say that Speaker Pelosi on USMCA has been cooperative, and accommodative and accessible.”