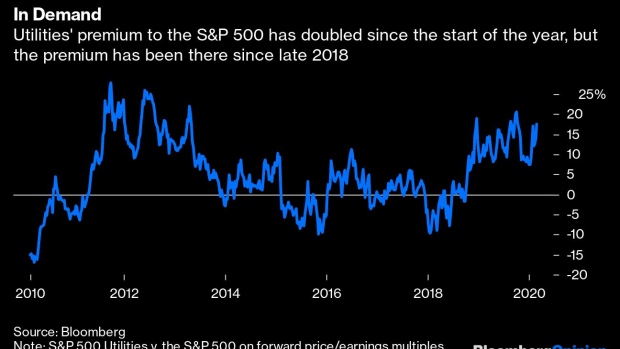 (Bloomberg Opinion) -- Utilities are more Tennessee Valley than Silicon Valley, but they’re having a distinctly tech-like moment. At more than 20 times forward earnings, they sport an average multiple on a par with tech stocks.

Have the poles-and-wires guys somehow morphed into digital growth machines? Not so much. Utility earnings are expected to rise by just more than 4% in each of the next two years, well below what’s estimated for technology stocks (and the broader market). Same goes for trailing earnings growth.

What the utilities do have going for them right now is the thing afflicting most everyone else: fear of a pandemic.

Wednesday marked a watershed in the energy world, with utilities’ weighting in the S&P 500 rising above that of the energy (or oil and gas) sector for the first time ever. Leave aside things like energy transition and climate change, and this dichotomy explains a lot. Oil and gas is a cyclical, global business where China looms disproportionately large, and the oil price is a go-to macro trade. A pandemic scare originating in the center of global demand growth is about as bad as it gets for oil — and it’s also not great for a host of other sectors relying on global markets and supply chains, tech included.

Utilities are the opposite of this. They are overwhelmingly domestic, with wires strung above and pipes laid below American streets. Demand for their products isn’t likely to be affected too much whether people are commuting or staying home. More importantly, demand doesn’t drive their near-term earnings anyway; regulators set an allowed return on investment. This is why energy stocks now yield almost 5% and utilities less than 3%. The majors are being penalized for spending money, while utilities are rewarded for doing just that.

It isn’t the promise of high growth pushing utilities higher; it’s more the sense their earnings will be resilient to whatever is coming on the coronavirus front. For example, we are yet to see what happens when a major outbreak is confirmed within the U.S.

Pandemic-flavored panic also offers a boost via the bond market. Here’s the utilities sector relative to the S&P 500 in terms of forward price/earnings multiples over the past decade:

The premium has obviously kicked up this year, but it has been there since late 2018. That was when the market sold off heavily on concerns about excessive tightening by the Federal Reserve. Then 2019 saw the interplay of fears about a trade war and the Fed’s pivot, first toward holding off on further interest-rate hikes and then to outright easing. Like the coronavirus, this backdrop of turmoil centered on international business activity played to utilities’ strengths.

The added twist is that utilities’ regulated earnings and high payouts have long led investors to treat them as bond proxies. Greg Gordon, an analyst at Evercore ISI, tracks the relationship between utility dividend yields and the yield on a Moody’s Corp. index of triple-B-rated corporate debt. As corporate bond yields feel the gravitational pull of a sinking 10-year Treasury yield — cut in half since the start of 2019 to today’s 1.34% — so utility yields have also reset lower and lower:

This presents a conundrum. On one hand, utility valuations clearly look stretched. Their premium to the S&P 500 looks historically high, and they also trade significantly above another defensive sector, healthcare.

And yet the spread between utility dividend yields and corporate bond yields has narrowed to less than 60 basis points, roughly half the average of the past decade. That leaves little room for utility yields to rise without breaching the long-established relationship with the bond index. The latter, meanwhile, is being held down by those record low Treasury yields; and what with pandemic fears and an oncoming election, it is hard to see right now what could shift those appreciably.

One risk is that the fear that has crept into high-yield bonds seeps up into the higher-rated end of the market. That would loosen the grip of investment grade yields (hardly bargains themselves) on Treasuries, meaning wider spreads — and ultimately higher dividend yields and lower prices for utility stocks.

It would be correct to say utilities are priced for something like perfection. In the current context, though, “perfection” means something pretty awful.