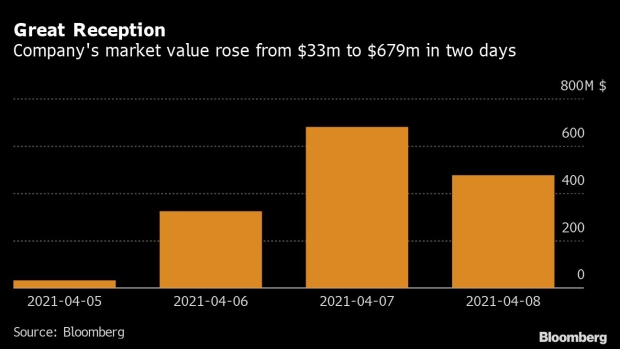 (Bloomberg) -- Every quarter or so in the U.S. equity capital markets, there’s a least one debut by a tiny company which completely blows up charts and traders’ minds. This current contender? UTime Ltd.

The Chinese maker of mobile phones and accessories went public on Tuesday in New York at $4 share. By Wednesday, the stock hit a peak of $107.33, up nearly 2,600% from its offering price. The company, valued at about $33 million at its debut, now has a market capitalization around $430 million even after the stock retreated Thursday.

At 875%, its first-day “pop” -- as the debut session is known -- gave UTime the best debut in the U.S. since Internet service provider Freeserve Plc jumped by 1,261% during the dot-com frenzy in 1999, according to data compiled by Bloomberg for companies that raised more than $10 million.

Representatives for the company didn’t immediately reply to an email seeking comment.

UTime is off the charts, but it’s not the only IPO darling in recent years.

The company was the latest of 22 IPOs in the U.S. to surge by at least 800% in their debuts over the past decade, according to data compiled by Bloomberg. These firms are fairly small -- UTime was the largest of the group raising $15 million. Their listings also tend to be managed by boutique banks. Boustead Securities, Brilliant Norton Securities and Fosun Hani Securities handled the UTime IPO.

While it’s showing signs of slowing, the IPO market registered a record quarter in the first three months of the year with $215 billion of proceeds, but nearly $100 billion of that came from the record wave of issuance by special-purpose acquisition companies.

One trader defined the price action seen with UTime as mind-blowing, but also an indication of investors’ desire to find and snatch “early on,” what could become a new hot stock. The stocks that fit this profile -- small in size with the deal managed by smaller banks - tend to be highly volatile. True to form, UTime is already making its way back down to earth. By 1 p.m. in New York, shares were trading at $52.89, down 36% on the day.