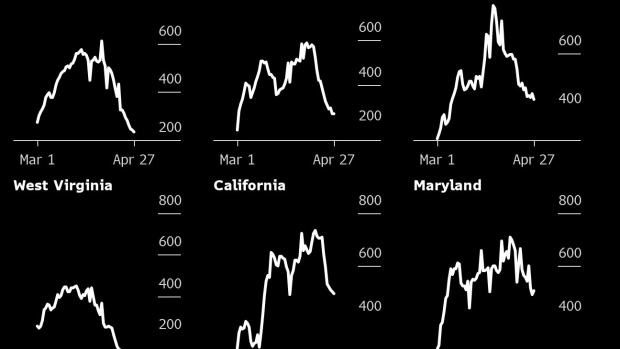 (Bloomberg) -- The number of people getting their first dose of a Covid-19 vaccine is declining in at least 47 out of 50 U.S. states, with many having made significant progress rolling out the shots but others still far behind.

In some places, the decline is the mark of a successful campaign: 10 states have started vaccinations for more than half their residents. But in places that have struggled, the slide has been going on for weeks. In some of those states, the number of new recipients has turned into a trickle.

“The rate of vaccination has slowed down nationwide,” said Texas Department of State Health Services spokesperson Lara M. Anton. As of April 27, first-time shots in the state fell by 54% from an April 11 peak, according to data compiled by the Bloomberg Vaccine Tracker.  “Everyone who was eager to get vaccinated has gotten their shot.”

There are also indications that the safety-based pause in the use of Johnson & Johnson’s shot had an effect. In a handful of states where vaccinations were gaining, the April 13 announcement correlated with a decline in new vaccinations. While state health officials acknowledged there was likely some slowdown because of J&J, they emphasized that it was hard to disentangle worries over the one-dose vaccine from an expected decline in new shots as the mass rollout winds down.

The confluence of trends leaves the U.S. campaign at a crossroads. Enough people have been vaccinated to cover more than half of the adult population. Covid cases are on the wane, likely beaten back by the combination of vaccines and existing immunity from previous infections. Warm weather is letting people socialize outside, where risks are lower. But it will take weeks or months to know if the gains are real and permanent, or if the inoculation effort will fall just short enough to see new pockets or widespread infection break back out.

State health officials and the White House say the vaccine campaign has moved into a different phase, aiming at people who either haven’t been able to sign up, haven’t made it a priority, or who have hesitations.

“We are now increasingly focused on others that will take time to reach,” Jeff Zients, the White House Coronavirus Response Coordinator, said last week at a briefing. “Getting as many Americans vaccinated as quickly and equitably as possible is our path back.”

Bloomberg’s analysis is based on Centers for Disease Control and Prevention data on the daily rate of people getting a first dose of a vaccine, whether it be Pfizer Inc. and Moderna Inc.’s two-dose shots, or J&J’s single-shot inoculation. From mid- to late April, 47 states and the District of Columbia show a clear downward trend in first doses administered. On Monday, the U.S. recorded its lowest one-day total of doses administered since February.

New vaccinations in some states have been falling since March. In Oklahoma, Ohio, Kentucky, North Carolina, Mississippi and a handful of other places, the number of people starting their doses peaked earlier than the rest of the country. Almost all of these places are also behind the national average for the percentage of people vaccinated, including states like West Virginia that were lauded for their early progress.

“We are needing to pivot our operation from fast, aggressive mass vaccination, to everywhere and easy to access,” Mandy Cohen, secretary of the North Carolina Department of Health and Human Services,  said in a phone interview.

In Louisiana in mid-March, the state was starting vaccinations for almost 20,000 people a day. As of April 27, that number had fallen to 5,807 people a day, using a seven-day average. On a per-capita basis, it’s one of the lowest rates in the country, in a state that ranks only ahead of Mississippi in people who have started vaccinations.

“We were seeing the beginning signs of slowing before the J&J pause,” said Joseph Kanter, Louisiana’s state health officer. “The pause did not help that at all, but I would not blame it.”

Kanter, in a phone interview, said that it’s been a challenge to get people in more rural parts of the state to get vaccinated. He said he’s been surprised by some of the resistance to the shots. “The politicization of it caught me a little bit off guard,” he said.

To make progress, the state needs access to single-dose packaging that can be deployed in primary care-offices. “They still trust their own doctor,” Kanter said of the people who haven’t gotten a shot yet. “We’ve got to make their own doctor able to vaccinate them.”

Other states peaked far later, in particular those that have gotten vaccines to more of their populations. Connecticut, California, New Jersey, New York, Texas and other states reached a high point in mid-April, though they have also started fewer new vaccinations since then.

“We, just as everyone else has, have seen a softening of demand,” said Margaret Fisher, an infectious disease physician who has been advising New Jersey’s government. As of Monday, 52% of the state has had at least one dose — eighth best in the country.

“With a lot of effort and a lot of very effective mega-sites, we were able to efficiently get a lot of vaccine into people’s arms very quickly,” Fisher said in a phone interview. “What we have now are a lot of people who are happy to get the vaccine but it’s not on top of their list of things to do.”

In California, the story is similar. New vaccinations peaked in mid-April but are now down by about a third. Later this month, the city plans to close down a mass vaccination site at Dodger Stadium, where it had performed more than 420,000 shots. It planned to shift the capacity to mobile vaccination clinics and other, more dispersed sites, Mayor Eric Garcetti’s office said in a statement.

It’s harder to parse out the exact impact of the April 13 U.S. decision to pause administration of J&J’s vaccine following a handful of reports of dangerous blood clots. In many states, the halt in the use of J&J’s shot coincides with a decline in vaccinations.

State health officials were cautious about saying J&J was behind those declines, however. Many said that the news came not long after they had already worked through the people most likely to seek vaccination.

Many states were already seeing a drop in demand before the pause of the J&J shot. State health officials in Virginia, North Carolina, Louisiana, Oklahoma and several other states said the impact of the pause was either minimal or hard to assess.

Danny Avula, Virginia’s vaccination coordinator, said the state had planned to use J&J’s vaccine to give to college students, who have low vaccination rates. The clinics had to be rescheduled with other vaccines after the J&J pause.

Demand for vaccines “dropped off precipitously this week,” Avula said in a phone interview on Friday. “But not because of J&J, but because that’s where we are in our supply-demand journey.”

The shift in vaccination trends has led state officials to change tactics. Lacking vaccines that can be packaged as single doses, state health officials are starting to tell local vaccine providers that some level of wasted doses is acceptable if it means making sure a person gets an appointment and a shot.

“A wasted dose in April is not the same as a wasted dose in January,” said Keith Reed, Oklahoma State Department of Health’s Deputy Commissioner, in a telephone interview. “In January every dose could go into a person. Right now we have excess inventory in the state."

In North Carolina, officials is sending the same message. Cohen said they know it will be necessary to vaccinate people in low-volume settings like doctors’ offices that aren’t well-matched to the large number of doses that come in the vials, and that expire if not used within hours.

A little bit of waste is OK if it makes the difference in vaccinating somebody or not, she said. “I don’t think I would have said that even two weeks ago,” Cohen said.

North Carolina has given first doses to 40% of people, slightly behind the national average. Cohen said the state is looking at what it can do, including providing incentives for people get vaccinated.

“We are starting to see a difference between us and other states and are trying to understand why,” she said.