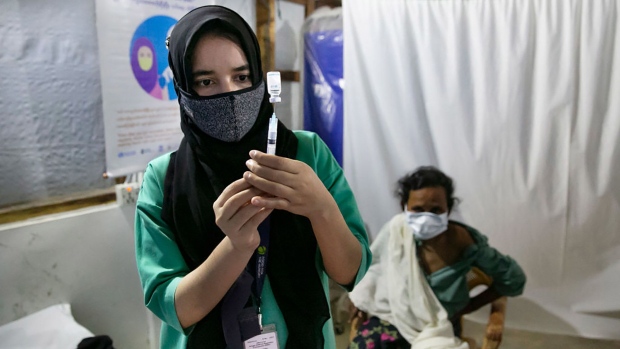 (Bloomberg) -- Expanding access to Covid-19 vaccines and confronting the rising dangers of climate change will dominate a week-long United Nations gathering in New York that’s taking place in person after going all-virtual in 2020.

More than 100 world leaders are expected for the annual UN General Assembly, a sharp change from last year when the world struggled through the Covid-19 pandemic without vaccines. Now as nations debate how to distribute billions of doses of vaccine and the impacts of extreme weather events rise, the UNGA is back in a hybrid mode.

The entourage accompanying the visiting leaders won’t be as large as in the past -- delegations will be limited to four members each in the main UN hall, while side events will be mostly virtual. That’s a nod to the painful reality of Covid more than 18 months after the outbreak emerged: The UN wants diplomats to have the face-to-face time they need to address crisis issues, but they don’t want to be remembered for hosting a super-spreader event.

“This is not the best solution,” UN Secretary-General Antonio Guterres told reporters heading into the event. “We will be trying to make it a second-best, mobilizing all our resources to allow for a maximum of interaction.”

The oft-criticized world body goes into the annual gathering this year with generally positive reviews from the public: A new Pew Research Center analysis finds that the UN is seen in a positive light by most surveyed this year, with a median of 67% expressing a favorable opinion of the UN, including 59% in the U.S.

Here are the key themes expected to dominate this year’s discussions at the UN podium and on the sidelines:

Guterres and the U.K.’s Johnson are calling for an informal, closed-door meeting on Monday in an effort to get countries to agree on bolder commitments ahead of the COP26 climate summit in Glasgow, Scotland in November.

Leaders from the world’s largest emitters, including the U.S., China and Australia, as well as small island states most immediately affected by rising sea levels have been invited to take part. Guterres said the idea is “to make an effort to build trust, to allow for this triple ambition to be met before COP 26: ambition in finance, ambition in adaptation, ambition in mitigation.”

The international community needs to raise “$100 billion to fund adaptation and resilience for climate-vulnerable countries,” according to U.K Ambassador Barbara Woodward. That means “getting ambitious plans from countries who have not set out how they will cut emissions, particularly phasing out coal, and revitalizing and protecting nature,” she said.

Biden will host a virtual summit on Wednesday that will focus on concrete measures to bring the pandemic to an end. Biden plans to call on world leaders to collectively donate one billion Covid-19 vaccines with the aim of inoculating 70% of the world in the next year as many countries are struggling to obtain shots.

The U.S. will also call for the donation and delivery of one billion test kits by 2022 and an acceleration of a previously announced pledge of 2 billion doses, according to an invitation sent by the Biden administration. The document describes them as “draft targets.”

The call comes amid controversy over the efficacy and morality of countries considering booster shots for their already-vaccinated populations, while hundreds of millions await their first dose.

Israel has administered millions of booster shots and is making preparations in case a fourth round is needed. The U.S. may start offering boosters this month, at least for those must vulnerable to serious disease, while the U.K. and Europe are also considering third doses. China has approved the use of boosters for high-risk residents.

In his first speech from the UN podium, Biden will seek on Tuesday to assure the world that America is still a reliable leader on the multilateral stage despite its rushed withdrawal from Afghanistan after the Taliban seized Kabul.

With the UN warning of a “humanitarian catastrophe” if aid doesn’t continue to flow into the war-ravaged country, the global body is in a bind. Few nations want to recognize or provide financial support to the Taliban government, which includes sanctioned terrorists and has a long history of abusing human rights, but they also don’t want the withdrawal of foreign forces to provoke a refugee crisis or deeper problems.

Foreign ministers of the five permanent members of the UN Security Council -- U.S., Russia, the U.K., China and France -- are expected to discuss Afghanistan in a meeting on Wednesday.

Iran’s new president won’t make an appearance, but Foreign Minister Hossein Amirabdollahian will represent the Islamic Republic as talks over the UN-backed Iran nuclear deal continue to stall and the U.S. and Western allies warn time is running out to keep the agreement alive.

The International Atomic Energy Agency bought some time for negotiators, striking a deal with Tehran this month that allows monitors to replace damaged surveillance cameras and filled memory cards at Iranian atomic sites.

UNGA has often served as a place for diplomats to try to broker an accord over Iran’s nuclear activities. This time around, the U.S. and its allies have warned that Iran’s continue enrichment of nuclear material will soon mean that the 2015 agreement won’t be worth sustaining.

The UN podium has long been the scene of iconic moments: Venezuelan President Hugo Chavez grandstanding about the smell of “sulfur” at the podium after U.S. President George W. Bush spoke; then-Israeli Prime Minister Benjamin Netanyahu waving a cartoon-style drawing of a nuclear bomb; and Bolivia’s Evo Morales holding up a coca leaf, the core ingredient in cocaine and a symbol of Andean indigenous culture.

This year’s speeches promise a different kind of drama. While the credentials of Myanmar’s current ambassador, Kyaw Moe Tun, have been challenged by the junta that seized power in a coup this year, the envoy remains in place and is likely to make a speech before the assembly. Afghanistan’s current ambassador, nominated by the ousted government of President Ashraf Ghani, is also expected to speak because the country’s new Taliban rulers haven’t challenged his credentials.

The coming week will end with the leaders of some of America’s closest allies in Asia -- Australian Prime Minister Scott Morrison, Indian Prime Minister Narendra Modi and Japanese Prime Minister Yoshihide Suga -- heading to Washington for the first in-person meeting of the Quad bloc on Friday.

The alliance of Indo-Pacific nations is widely seen as an attempt to put up a united front against China’s ambitions in the region, and the meeting is likely to draw criticism from Beijing.

The meeting between Morrison and Biden will be buoyed by the new submarine deal reached by the U.K., U.S. and Australia. That scuttled a $65 billion agreement between Australia and France, prompting the French foreign minister to say he felt “stabbed in the back” and the French government to recall its ambassadors to the U.S. and Australia.