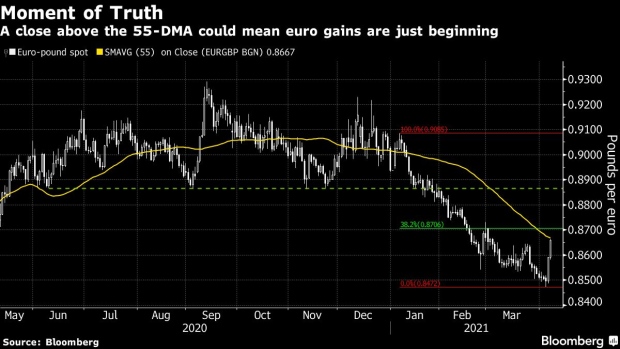 A man receives a dose of the AstraZeneca Plc Covid-19 vaccine at Central Mosque of Brent in the Willesden Green district of London, U.K., on Friday, March 19, 2021. Skepticism and misinformation are hampering efforts to protect the U.K.'s most diverse and deprived communities. Photographer: Hollie Adams/Bloomberg , Bloomberg

(Bloomberg) -- Pound bulls betting on the U.K.’s superior vaccine rollout are getting cold feet, threatening one of the hottest currency trades of the year.

The euro recorded its biggest jump against sterling in 2021 on Tuesday, and extended gains above 86 pence on Wednesday. Traders have been selling the pound on concerns relating to AstraZeneca Plc’s shot -- which the U.K. is heavily dependent on -- while the shared currency has been buoyed by projections the bloc will hit immunization targets earlier than expected.

It comes after months of the U.K. currency outpacing that of its nearest neighbor, racking up multi-year records as traders bet Britain’s rapid inoculation program would leave the European Union in the dust.

Now, investors risk getting left on the wrong side of the trade with leveraged funds’ long sterling bets close to their highest in a year, according to data from the Commodity Futures Trading Commission. Hedge funds closed bullish pound positions on Wednesday.

“We are observing a reversal of the vaccination euphoria,” said Petr Krpata, a strategist at ING Groep NV. “It is also exaggerated by speculative positioning, with the pound being the biggest speculative long in the G-10 FX space.”

After Brexit trade discussions were sealed at the end of last year, the focus for pound traders pivoted to the U.K.’s vaccine rollout, which quickly established a lead over the EU. Britain has given around three times as many doses as a proportion of its population compared to the EU, according to Bloomberg’s vaccine tracker, with the bloc’s effort being curtailed by disputes and delays.

Now, the U.K. campaign is hitting new snags. Vaccination centers and pharmacies are facing a “significant reduction” in supply of doses during April, meaning that older people waiting for second doses will be prioritized over younger people getting their first shot.

Meanwhile, U.K. medical regulators advised that under-30s should not receive the AstraZeneca vaccine in a “course correction” to the country’s rollout plan. The pound dropped on Wednesday as shorts in the euro-sterling pair were unwound, according to a Europe-based trader.

“It looks like many positives are in the price of the pound by now and the currency is looking overvalued and overbought, especially versus the euro,” said Valentin Marinov, head of G-10 currency research at Credit Agricole in London. “Sterling is no longer the vaccine champion of G-10 and, more broadly, the slowing pace of the Covid vaccinations in the U.K. could ultimately delay the government’s plans to reopen the economy.”

To be sure, April is historically a supportive month for the pound, driven in part by the new U.K. tax year and corporate dividend repatriation of overseas income. The U.K. government, meanwhile, is insisting it’s on track to reach its target of vaccinating all adults by the end of July. It began giving out Moderna Inc. shots on Wednesday.

“Compared to the EU, the U.K. will emerge first from lockdown, gaining a head start in its economic recovery,” said Stuart Cole, chief macro strategist at Equiti Capital. “Indeed, in the U.K. the talk is very much of the potential strength of the recovery, while in the EU they are still working out how to distribute their pandemic recovery fund.”

But after finally breaking the 0.85 level against the euro last week, the pound hit its weakest level in a month on Wednesday as new vaccine headlines hit.

“We are now very much at the stage where a lot of the good news on the vaccine front is now priced,” said Ned Rumpeltin, European head of foreign exchange strategy at Toronto-Dominion Bank. “This has left sterling exposed to risks of a correction against some of its main trading partners, just as some of the other major economies are starting to close the jab gap.”