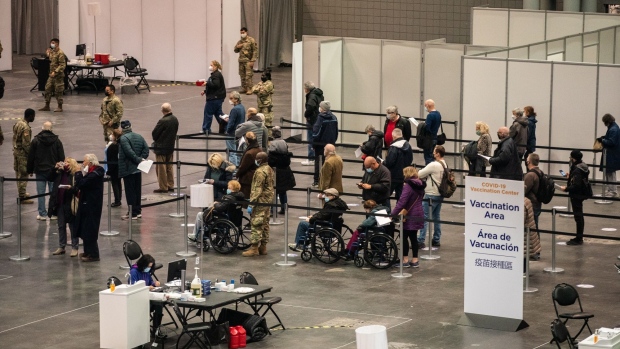 People stand in line to receive a dose of the Covid-19 vaccination at the Jacob Javits Convention Center in New York, U.S., on Wednesday, Jan. 13, 2021. New York plans to open pop-up sites statewide that could be used to test customers and workers in a push to reopen offices, restaurants and theaters, Governor Andrew Cuomo said Tuesday in his State of the State speech. , Bloomberg

(Bloomberg) -- Americans rushing to get vaccinated against Covid-19 are encountering limited supplies, balky technology and communication failures, highlighting the challenges states face as they try to scale up and deliver shots to millions more people.

In the U.S., 10.8 million doses have been given, according to Bloomberg’s vaccine tracker. Many states are moving into the next phase of the campaign, offering shots to those 65 and older and people with compromised health as infections soar and the federal government pushes for a speedier process. With expanded eligibility announced this week, another 128 million Americans can potentially get shots, and many are dialing their doctors and searching the web to answer the question: Where and when can I get a vaccine?

Elizabeth Smith, a veterinarian in Ripley, Mississippi, spent three hours Tuesday trying to schedule appointments on the state’s website for her parents. She kept receiving error messages. Sometimes, she would make it to the final stages of registration only to get kicked off the page.

That night, she set an alarm for midnight. It took only a few minutes before she could make appointments. Smith sent text messages to two of her friends alerting them that they, too, should try then. They were both successful, she said.

Not everyone has been so fortunate. More than 8,000 people were waiting to register through the state’s online portal Wednesday afternoon.

Mississippi’s vaccination plan has been “significantly altered” this week, particularly in the past day, the health department said in a statement Wednesday. The scheduling website, according to the statement, wasn’t designed to accommodate the “monumental surge” that it’s experiencing.

The struggles of Mississippi residents are being widely shared by people in other states.

Quickly moving into immunizing the general public requires health departments to come up with administration sites while factoring in the need to keep them socially distant, one of the many logistical hurdles they must address.

“It will ultimately help the general population, no doubt,” Louissaint said. “But it will take a little bit of time, especially at the local level, for partners doing the execution to work through that pain.”

In Georgia, shots were made available to all seniors on Monday. Week One proved chaotic. The state’s health department posted a vaccine map on its website in the afternoon yet even that didn’t help.

In Fulton County, home to Atlanta, the phone number of one family-practice clinic listed on the site as having the vaccine reached a recording saying it did not –- and had no idea when it would. The clinic was off the state’s list by Wednesday. The other contact was the Fulton County Board of Health, which was overwhelmed the first morning.By 10 a.m Monday, its vaccine scheduling website said it had booked every available appointment for the week. The county vaccine phone number put callers on hold for 45 minutes to an hour –- then rang through to a recording that had nothing to do with the vaccine.Bob Stock, a 70-year-old retired customs broker, got a message from his doctor shortly after Governor Brian Kemp made the announcement, telling him to watch his online messaging application at Piedmont Hospital for an alert that would allow him to book a shot.It came on Monday, but the closest Piedmont clinic was already out of doses. Stock made an appointment for Friday at a Piedmont clinic an hour south of his home in Atlanta, which was itself out of vaccine an hour after he booked his shot. By the next day, the Piedmont patient messaging system said it is out of vaccine.

Similar experiences are playing out in New York, where Governor Andrew Cuomo this week expanded eligibility to those 65 and older, teachers and some essential workers.

Mark Winiarski, a 70-year-old in Great Neck, said it’s “impossible” to book an appointment and that the system to register isn’t friendly to seniors like him.

“You keep going online and refreshing your browser, assuming you know what that is, and things don’t change,” Winiarski said. “I guess state and local officials expect seniors to sit for hours on end, and just keep refreshing. The whole system is just not set up for the seniors it’s supposed to be serving.”

Hundreds of thousands of people are navigating the system successfully, said Gareth Rhodes, a member of Cuomo’s coronavirus task force. Yet he noted that while 7 million New Yorkers currently are eligible to be vaccinated, only 300,000 doses are allocated to the state by the federal government each week.

“The key here is patience,” he said. “People have to be patient. This is going to take time.”

Local officials are working to scale up and schedule millions of people for immunizations at a time when they’re dealing with a post-holiday surge of coronavirus cases. Expanding eligibility won’t immediately solve the challenges of getting shots into arms, said Lori Tremmel Freeman, chief executive officer of the National Association of County and City Health Officials.

“We released a vaccine in our country before we funded the vaccination effort,” she said.

Some seniors say they’ve been patient and want answers. Sandy Snyder, 82, of Bloomington, Illlinois, has been asking her doctors for weeks when and how she will be able to get the vaccine. She asked her primary care physician, her oncologist, her dentist and a clinic that one of her doctors thought would be dispensing the vaccine.“Yesterday, I got my first piece of somewhat information, when I went to Walgreens to pick up a prescription,” said Snyder, whose sister and two close friends have died from Covid since late November.

Arline Ruef, an 82-year-old in Olympia, Washington, called the local health department searching for information. No luck. She tried her doctor’s office. None there either.

“I have no idea and I don’t know how to get any answers,” Ruef said as to when she expects to be vaccinated.

Even some people in the same household have had different experiences in trying to get immunized. In Georgia, Stock’s wife, Patty Murphy, can’t get an appointment. Her doctor is at a smaller practice that hasn’t yet received any vaccine doses and she’s now turning to the overwhelmed county health department.“I hope she gets something soon,” Stock said. “Otherwise, I’ll be able to go out again and she’ll still have to hang around the house.”