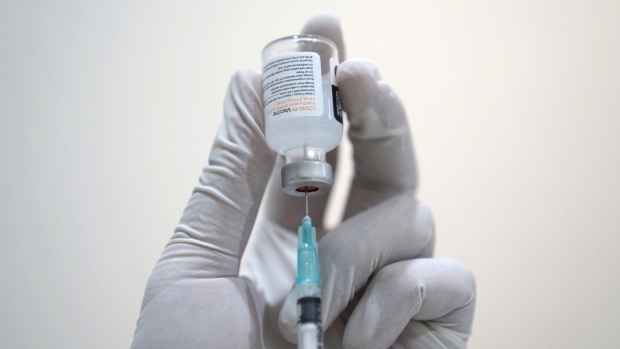 A health worker prepares to administer the Sinovac Biotech Ltd. Covid-19 vaccine on a passenger at Soekarno-Hatta International Airport in Cengkareng, Indonesia, on Friday, July 9, 2021. The Covid-19 crisis has forced dozens of carriers and other aviation businesses to restructure or seek bankruptcy protection. Photographer: Dimas Ardian/Bloomberg , Bloomberg

(Bloomberg) -- Tanzania’s semi-autonomous Zanzibar archipelago begun vaccinations against the coronavirus, leading the way in a nation that downplayed the extent of the pandemic for more than a year.

“The Sinovac vaccines were originally meant to be administered to people who wanted to attend the annual Hajj pilgrimage,” Shajak said. “After Saudi Arabia prohibited foreign visitors due to the coronavirus outbreak, we decided to give those vaccines to our front-line workers.”

With Tanzania now inoculating people, Eritrea and Burundi remain the only African countries yet to start vaccinating against the deadly virus. The holdouts, due to reasons from denial of the severity of the disease to logistical challenges and hesitancy, are causing concern that they could become breeding ground for new Covid-19 variants and stifle global efforts to end the pandemic.

Africa has reported almost 6 million cases and fully vaccinated less than 1.2% of its population, according to the Africa Centres for Disease Control and Prevention.

Zanzibar aims to inoculate 1.4 million of its 1.6 million people -- including children as young as 10 years -- as part of a plan to reboot its tourism-dependent economy. The wider population will get shots once vials procured by Tanzania’s central government through the Covax vaccine-sharing program arrive, Shajak said.

President Hassan’s administration submitted a request for vaccines to the Covax facility last month, and asked the International Monetary Fund for $571 million to help the economy recover from the pandemic.