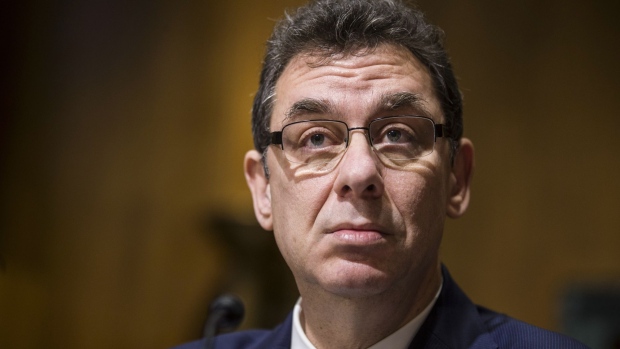 Albert Bourla, chief operating officer and chief executive officer of Pfizer Inc., listens during a Senate Finance Committee hearing on drug pricing on Capitol Hill in Washington, D.C., U.S., on Tuesday, Feb. 26, 2019. Top executives from seven of the world's biggest drug companies are testifying before Congress to talk about drug costs, a long-awaited session that could kickstart legislation to rein in prices. , Bloomberg

Preliminary results of a U.S. National Institutes of Health study found that mixing and matching vaccines produces as much or more antibodies as using the same shot as a booster. Bourla said in an interview on Bloomberg TV’s “Balance of Power with David Westin” that the study was very reliable even though it involved only a modest number of patients.

The Food and Drug Administration is poised to authorize vaccine recipients to get a booster shot from a different manufacturer. The agency is still considering how broad such an authorization would be, and it’s not clear when a decision could be announced.

Pfizer and its partner BioNTech SE received FDA clearance for their booster shot last month. The agency is expected to clear boosters from Moderna Inc. and Johnson & Johnson this week after they were backed by a panel of scientific advisers to the FDA. The advisers didn’t make a recommendation on mixing, though some signaled openness to it.

Bourla said an authorization of the Pfizer vaccine in kids age 5 to 11 was likely by the end of the month, based on the FDA’s scheduled advisory panel meeting to review the data on Oct. 26.

If that shot, which is one-third the dose now approved for adults, gets emergency authorization, Bourla said Pfizer would be “able to provide it almost immediately.”