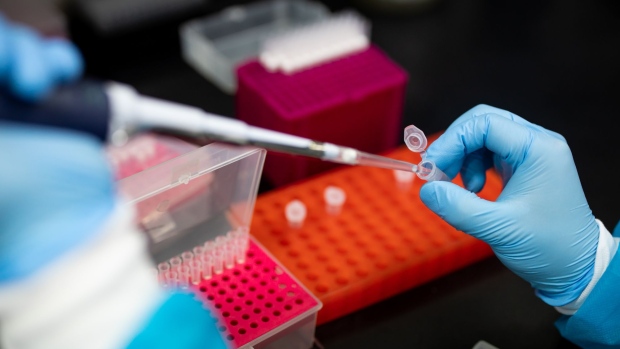 An employee uses a pipette in an Osang Healthcare Co. laboratory manufacturing the GeneFinder Covid-19 Plus RealAmp kit in Anyang, South Korea, on Monday, May 4, 2020. Osang, a South Korean medical diagnostics maker has ramped up production and is aiming to sell millions of virus test kits to the U.S., where cash-strapped states are scrambling for federal funds to buy them. Photographer: SeongJoon Cho/Bloomberg , Bloomberg

(Bloomberg) -- Emerging-market stocks and currencies headed for a weekly gain amid optimism progress is being made toward developing coronavirus vaccines, and as more nations roll back lockdowns.

Sentiment was tempered as the week progressed by signs U.S.-China tensions are increasing once again, including escalating rhetoric from President Donald Trump and Senate legislation that may lead to delisting of Chinese companies from American stock exchanges. China announced plans to impose a national security law on Hong Kong, further adding to geopolitical frictions.

The following is a roundup of emerging-market news and highlights for this week through May 22: