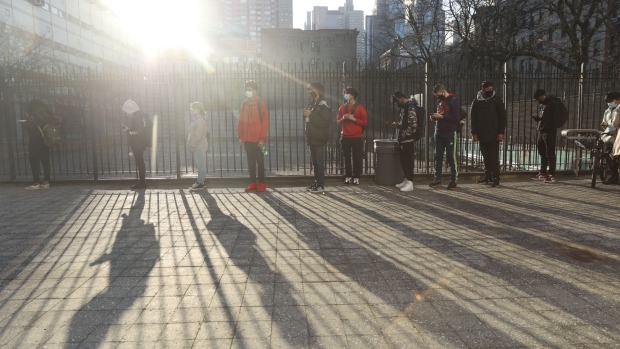 Students wait in line to enter a New York City public high school in New York, U.S., on Monday, March 22, 2021. Children in the U.S., Mexico and India are among those who have been shut out of schools longest, while those in France and Switzerland suffered only a few weeks of distance learning before returning to classrooms, according to the latest data from Unesco, which has been monitoring the disruption to education. Photographer: Angus Mordant/Bloomberg , Bloomberg

(Bloomberg) -- The 100% efficacy of Pfizer Inc.’s Covid-19 vaccine in early teens is intensifying pressure on schools to decide whether to make shots mandatory when students return.

New Covid-19 variants, including the B.1.1.7. strain first identified in the U.K., are spreading fast among adolescents. Momentum is gathering among advocates to make shots a requirement should the U.S. Food and Drug Administration approve them for those under 16.

“The writing is on the wall. It’s going to happen,” said Peter Chin-Hong, an infectious disease doctor and professor at the University of California-San Francisco. “B.1.1.7. has raised the specter of needing young people to be immunized. Colleges are talking about mandating it.”

The question of how stringent to make vaccine requirements is confronting most U.S. institutions and businesses. Rutgers University in New Jersey will require them for students this fall and Houston Methodist Hospital this week became the first in the country to mandate that its staff be inoculated. Meanwhile, software makers are developing digital “vaccine passports” that people would carry to show that they are immunized before entering planes, stadiums or schools.

On Wednesday, Pfizer said its Covid-19 vaccine was 100% effective in a final-stage trial in children ages 12 to 15, which could pave the way for teens and pre-teens to get shots before the next school year. The drugmaker and its partner, BioNTech SE, already have emergency use authorization for people ages 16 and up and plan to seek approval in U.S. and Europe to include the younger age group as soon as possible.

While the federal government decides which vaccines are part of its recommended schedule of child immunizations, it’s up to states to mandate which vaccines are required for school, and whether to allow any exemptions. Most states and school districts have so far been reluctant to require Covid-19 vaccines, for fear of igniting lawsuits and political battles from anti-vaccine groups and right-wing politicians loyal to former President Donald Trump.

Proponents of mandates and vaccine passports say that all 50 states already require students to get immunized for at least nine different diseases, including polio and the measles. All but five allow people to opt out on religious or personal grounds.

In Los Angeles, which has been hit hard by the coronavirus, the largest school district is amenable to state officials adding Covid immunization to the must-have list. Superintendent Austin Beutner said in January that the district would likely require students to be vaccinated before they return to campus, if they are available.

The Los Angeles Unified School District backed off after it was sued by teachers who oppose the vaccine, but the agency’s position is that state or federal regulators should mandate it.

“We expect in time, like tests for tuberculosis or vaccines for the measles, mumps and whooping cough, the Covid vaccine will be essential to keeping school safe,” Barbara Jones, a spokeswoman for the district, said in an email. “One should expect federal and state health authorities to take actions in this area in the coming months.”

Kenneth Fox, the chief health officer of Chicago’s schools, said recently that state law prevents the district from requiring a vaccine that’s being used under an emergency authorization. In Texas, the Fort Worth schools are waiting for guidance from county health officials, said Clint Bond, a spokesman for the district.

The question is pressing. In the early days of the pandemic, few young people fell seriously ill. The highly contagious B.1.1.7. variant has been hitting teens much more frequently.

“B.1.1.7 is a game-changer,” said Michael Osterholm, director of the Center for Infectious Disease Research and Policy at the University of Minnesota, who served on a Covid-19 advisory board during President Joe Biden’s transition. “Kids are now involved, younger kids, in a way we’ve not seen before. Kids are now the primary source of spread in a community.”

That’s part of the problem in Michigan, which has had the fastest-growing spread of Covid-19 cases over the past seven days, largely due to a spread on college campuses and at scholastic sports events. Governor Gretchen Whitmer on March 19 mandated testing as often as three times a week for high-school athletes.

The main focus is on getting more people vaccinated, but without mandates, said Bobby Leddy a spokesman for Whitmer. He said vaccine passports aren’t the role of state government.

Opposition is mounting as Republicans sense a potent cultural issue. In New Jersey, Republican gubernatorial candidate Hirsh Singh -- a Trump loyalist -- sent out a fundraising email saying that he would accept vaccine passports “over my dead body.” He went on to write that, “our families didn’t come to this great country legally in order to have Joe Biden, Kamala Harris, and Anthony Fauci tell us we can’t travel without undergoing forced vaccinations!”

Biden has said the administration hasn’t committed to vaccine passports. White House Coronavirus Response Coordinator Jeffrey Zients said in a March 12 briefing that it is exploring ways to let people demonstrate that they are vaccinated and that any solution would be “designed from the start to protect people’s privacy.”

Brian Behlendorf, general manager of blockchain healthcare and identity at the Linux Foundation, said software providers are working on digital documents that could prove immunization without sharing other personal data. Businesses, governments and schools could require them.

“You get this one digital version of the CDC vaccination card,” Behlendorf said. “No one wants to hold any more personal data than they need.”

Behlendorf predicted that by the third quarter, a vaccination passport app will exist.

“It’s not a new thing to require vaccinations,” he said. “We do know that it is already required to cross borders, and other vaccinations are required for schools, even private ones.”

Pressure is building. In Michigan, the spike led the Grand Rapids Public School District to delay an attempt to raise the number of in-person school days for the second time in six months. The district will redouble its push to get everyone vaccinated, said spokesman John Helmholdt.

“We’re not going to mandate or require vaccines,” he said. “But we’re certainly going to communicate it.”